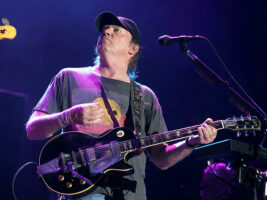 There can’t be too many people with functioning ears and even a passing interest in rock folklore who haven’t heard the story, but let’s indulge ourselves again. One day in 1972, Neil Young rowed Graham Nash out into the middle of the lake at his California ranch and instructed producer Elliot Mazer to play his freshly completed new album, Harvest, at extreme volume, using his house and barn as stereo speakers. When Mazer asked if the playback of one of the all-time great guitar albums was to its creator’s satisfaction, Young famously hollered back “More barn”.

On the eve of the 50th anniversary of that landmark record, here’s Young referencing that fabled occasion with the title of his 41st album and the follow-up to 2019’s Colorado. Recorded this summer under a full moon at a 19th Century barn (naturally) in the Rockies, it features the revived Crazy Horse line-up, with Ralph Molina on drums, bassist Billy Talbot and founding member Nils Lofgren. While its 10 tracks display some of the customary quality control issues we’ve come to expect, there are glimpses of 76-year-old Young and his band in their pomp.
The feel is enjoyably loose as Barn segues between aching sepia-tinged balladry, raging climate change anthems and devastating lead guitar work that threatens not so much to strip the paint from the walls of the titular farmyard building as raze it to the ground.

We begin, though, in gentle, contemplative fashion on Song Of The Seasons. A harmonica and accordion mingle with Young’s placid acoustic strums as he sets the scene, “looking through a wavy glass window in this old place by the lake”, a realm where “nature makes no mistake”. It could be Young circa Harvest until a timely reference to “masked people walking everywhere” catapults us into the present day.
The more succinct Heading West sweeps away the benign atmosphere, although it’s no less reflective lyrically. The throaty growl of Old Black assumes control from the first beat as Young spins memories of his boyhood, “fishing at the mill”.
Change Ain’t Never Gonna has an affable rootsy charm, Young playing piano and blasting away on his harmonica as he dreams of “saving the planet from the fuel-burning mob”. The wantonly ragged Human Race is even more directly concerned with impending climate disaster and the impact it’ll have on young people. Three times, Young cuts loose into eviscerating, unscripted solos that threaten to boil over into screeching bedlam before ending in a guttural feedback rumble and Molina’s tumbling drum fill.

Not everything hits the mark. The bristling alt-rock Canerican has some exhilarant riffing and mighty Bigsby bends, but it’s centred around some disappointingly weak wordplay, while Young’s laboured coupling of “you changed my life for the better, wore my love like your favourite sweater” on Shape Of You, an otherwise adorably cute statement of Young’s adoration of wife Daryl Hannah, isn’t one for the ages.
A couple of bruised slow-burning pieces elevate Barn above Colorado, though. They Might Be Lost unfolds steadily in 6/8, a foreboding mood gathering around Young as he strums his acoustic and waits for “the boys to come get the goods”. It’s a timeless piece of storytelling.
The second highlight is the brooding eight-minute penultimate track Welcome Back. Young relishes drawing out the line “I’ve been singing this way for so long, riding the storm, might remind me of who we are and why we walk so lowly”. As the story develops at a somnambulant pace, he and Lofgren exchange improvised licks that twist this way and that. They flirt continually with feedback, the occasional outside note allowed to remain, with Molina’s restrained ornamentation a tranquil guiding presence.
Neil Young & Crazy Horse. Image: Matthew Eisman / Redferns via Getty Images
The sense of fun and kinship is audible, and you can imagine these weathered old friends circled together in the barn, feeling their way and exchanging knowing glances, as they’ve been doing since 1969’s Everybody Knows This Is Nowhere. The accompanying documentary on the making of the album, directed by Hannah, should be a delight.
Barn is an archetypal Crazy Horse release, and there’s nothing even remotely surprising here, yet in the autumn of Neil Young’s eighth decade, there are moments on this album that find him sounding as vital as when he first yelled that demand for “more barn”.
With 2022 set to bring a new Crazy Horse album titled Toast, plus the Early Daze collection and a 50th anniversary expanded edition of Harvest, alongside the latest entry in Young’s Archives series, the rate at which his astonishing body of work continues to expand shows no signs of slowing.
Neil Young & Crazy Horse’s Barn is out now.
The post Neil Young & Crazy Horse – Barn review: enough beguiling moments to be considered one of Young’s recent highlights appeared first on Guitar.com | All Things Guitar.