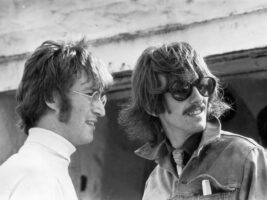 Newly unearthed audio from when the Beatles were creating Let It Be has reportedly revealed that the group had nearly fired George Harrison and replaced him with Eric Clapton.

The audio clip allegedly reveals John Lennon, speaking to Paul McCartney and Ringo Starr, responding to Harrison’s temporary departure from the band in January 1969. “I think if George doesn’t come back by [next week] we ask Eric Clapton to play,” Lennon purportedly said on tape, per the Daily Mail.
Harrison, who at the time felt his contributions to the band had been overshadowed, had left the Beatles and gone to visit his mother in Liverpool. He would only return to the Let It Be sessions six days later.
Lennon, despite almost sacking Harrison, wasn’t completely without sympathy for the guitarist. The audio clip reveals Lennon rationalising that Harrison’s attitude was “a festering wound and we allowed it to go deeper and we didn’t even give him any bandages”.
The audio recording is taken from a wealth of unheard and unseen footage that will feature in Peter Jackson’s upcoming documentary, The Beatles: Get Back, which aims to shed light on the making of the final Beatles album during a period that many believe to be incredibly tense for the band.
The documentary will be released onto Disney+ in three parts on 25, 26 and 27 November 2021.