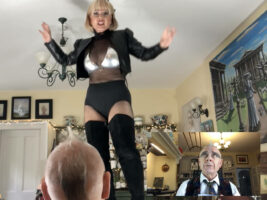 King Crimson’s Robert Fripp has rejoined his wife Toyah Willcox in the kitchen for the latest episode of their Sunday Lunch cover series. This week’s upload was a cover of The Velvet Underground’s Venus In Furs.

Uploaded once again to Toyah’s YouTube channel, the video was captioned: “Robert is at home and he’s seated in the kitchen. Toyah’s ditched the cooking and for Sunday Lunch there is an intimate performance from that burning venus Toyah aboard the kitchen table. It might just make the fur fly!”

Fripp returned home last month after completing the US leg of King Crimson’s Music Is Our Friend tour. The group concluded the tour in Washington, DC with a concert at The Anthem.
Though he was out on the road, the couple continued making their weekly uploads on a regular basis, with Toyah sharing her own solo covers – of tunes by The Doors, Chris Isaak and more – while Fripp shared his reactions to them.
In one video, the roles were reversed: Fripp gave a backstage tour of King Crimson’s concert at Nashville’s legendary Ryman Auditorium while Toyah shared her reaction.
King Crimson plan to hit the road again in November 2021 with a trek through Japan. The leg kicks off with back-to-back shows at Tokyo’s International Forum on 27 and 28 November.
The post Watch: Robert Fripp reacts to Toyah’s cover of The Velvet Underground’s Venus In Furs appeared first on Guitar.com | All Things Guitar.