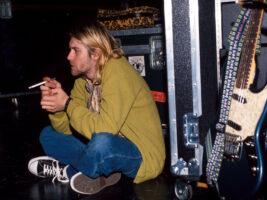 American businessman Jim Irsay has initiated the bidding process for Kurt Cobain’s notorious Fender after the musician’s heirs pledged to donate a portion of the proceeds to a mental health charity. The guitar in question: the blue 1969 Fender Mustang used during the Smells Like Teen Spirit music video.

The guitar most widely recognised for its appearance in Nirvana‘s 1991 global hit was announced as headed to auction last month, with experts predicting it would sell for approximately $800,000.
However, after Cobain’s heirs have recently promised to donate a substantial amount of the proceeds to the mental health charity, Kicking The Stigma, American tycoon and owner of NFL team the Indianapolis Colts has initiated the bidding at $2 million – already far more than the predicted price.
Irsay who has already spent millions on music memorabilia, including a drum set from The Beatles, helped found the non-profit organisation that the money will be donated to, using the funds to aid in the education, support and advocacy of mental health and mental illness.
“This guitar is big, and it relates so much to stigma,” Irsay told The Indianapolis Star. “When you have a mental illness, people die. These are fatal diseases — bipolar, schizophrenia, post-partem depression, alcoholic addictions. With fatal diseases, people die and they don’t choose to die. Those of us who are alive, we’re not stronger or better. We didn’t get our act together more. We didn’t have more character. That’s where it’s so false.”
Image: Rob Pinney/Getty
Through the Kicking The Stigma initiative, Irsay and his NFL team have already donated over $16 million to similar US-based organisations, with that figure set to grow exponentially when the Fender goes to auction later this month.
“Right now, there’s darkness upon people in America and throughout the world,” he said when describing his passion for the mental wellbeing initiative on the Colt’s website. “There are people on this sunny day that are going through horrors. They’re sitting alone, the world is dark, they see no way out and they’re in about the worst space you can possibly think of. They may be wealthy, they may be beautiful and handsome, they may be homeless, they may be whatever — it doesn’t matter. Mental illness does not differentiate.”
The auction will take place on May 20 at Time Square’s Hard Rock Cafe as part of Julien’s Auctions Music Icons series. Find out more at juliensauctions.com.
The post NFL owner makes opening bid of $2 million on Kurt Cobain’s Fender Mustang appeared first on Guitar.com | All Things Guitar.