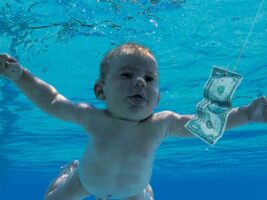 The lawsuit in which Spencer Elden, the baby on the Nevermind album cover, accused Nirvana of child pornography and sexual exploitation of a minor has finally come to a close, with the court deciding that the band are innocent of any wrongdoing.

READ MORE: Micky Dolenz Of The Monkees Reportedly Suing The FBI Over ‘Heavily-Redacted’ Files On The Band

In August of last year, controversy was stirred as thirty-year-old Spencer Elden, otherwise known as the baby on the cover of Nirvana’s 1991 album Nevermind, took the band to court – accusing the members of child pornography due to the photo of him at four-months-old swimming naked on the cover.
Now having gone to court three times since the initial lawsuit, the US Courts decided on Friday (September 2) that Elden’s claims were futile and have denied him permission to raise another legal battle regarding the situation.
“In short, because it is undisputed that [Elden] did not file his complaint within ten years after he discovered a violation… the court concludes that his claim is untimely,” Judge Olguin wrote following the decision. “The court is persuaded that it would be futile to afford plaintiff a fourth opportunity to file an amended complaint.”
The case, which involved seventeen defendants including the band’s surviving members, members of Kurt Cobain’s estate and the photographer responsible for the cover, explored the ‘psychological damage’ inflicted on Elden as a result of the image and requested that $150,000 be paid out to him in compensation.
Commenting on the lawsuit last year, the defendants made a motion to dismiss the case, stating that any damage inflicted on Elden was “not serious” as he had made three decades’ worth of profit by self-anointing himself as the ‘Nirvana Baby’ before filing the lawsuit.
“He has re-enacted the photograph in exchange for a fee many times; he has the album title Nevermind tattooed across his chest,” he motion stated. “He has appeared on a talk show wearing a self-parodying, nude-coloured onesie; he has autographed copies of the album cover for sale on eBay, and he has used the connection to try to pick up women.”
Now, as the legal battle has officially reached its outcome, ruling against Elden’s claims, Bert Deixler, a legal representative for the defendants’ spoke to Reuters on behalf of the decision, stating:
“We are pleased that this meritless case has been brought to a speedy final conclusion.”
The post Nirvana wins legal battle as ‘Nevermind Baby’ lawsuit dismissed for the final time appeared first on Guitar.com | All Things Guitar.