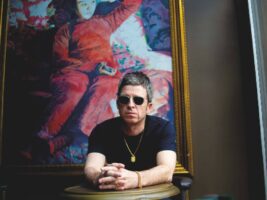 Noel Gallagher has said that “loads of middle-class” bands merely wear guitars instead of playing them while lamenting rising costs preventing working-class kids from being able to form bands.

In UK tabloid The Star‘s Wired column, Gallagher said, “There’s lots of singer-songwriters, loads of middle-class bands… wearing guitars as oppose to playing them. But four or five guys from a council estate can’t afford guitars.”
He continued, “I’ve actually read that in Britain since 2008, with the increase in kids who are privately educated who are in the charts, there’s barely any kids who aren’t privately educated who are successful in the music industry in my country.”
Gallagher singled out the rising costs of being in a band as the main reason behind the decline of working-class acts. Beyond the prices of guitars, Gallagher also bemoaned the lack of affordable rehearsal spaces, saying, “They’ve all been turned into wine bars and flats.”
Gallagher most recently released his first best-of compilation Back the Way We Came Vol.1 for The High Flying Birds, consisting of 18 tracks compiled by the Chief himself that roughly recaps in chronological order his self-titled 2011 debut, the self-produced Chasing Yesterday (2015) through to 2017’s Who Built The Moon?.
Guitar.com gave the compilation a four-out-of-five star review, praising the willingness to take more experimental cuts from his catalogue to give the compilation true high points when Gallagher exits his comfort zone.
In other Oasis news, a guitar belonging to Gallagher that was damaged backstage on the night that Oasis split will be going up for auction in May. The red Gibson ES-355, which has been repaired, was damaged backstage at the Rock en Seine festival in Paris in 2009 and will go under the hammer at the starting price of €150,000 (£125,000).
Gallagher primarily used his red Gibson ES-355 between 1996 and 2011. He famously described the Gibson as “the best guitar I ever had”.
The post Noel Gallagher says “loads of middle class bands” just “wear guitars” instead of playing them appeared first on Guitar.com | All Things Guitar.