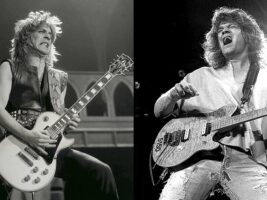 A teaser clip from the upcoming Randy Rhoads documentary has been released, and it discusses the “rivalry” between Rhoads and Eddie Van Halen.

The footage comes from the upcoming documentary Randy Rhoads: Reflection of a Guitar Icon which is due out 6 May.
Discussing the rivalry between the two, guest interviewee Kim McNair – Randy’s friend – states: “This was the years of guitar heroes. To a large degree, bands were judged on their guitar player. I think all the guitar players in town kept up on each other.”
Archived audio of Van Halen also emerged in the clip of him discussing Rhoads, saying, “He was one guitarist who was honest, anyway. Because he said everything he did he learned from me.
Van Halen continues by saying “He was good. But I don’t really think he did anything that I haven’t done. And there ain’t nothing wrong with it. I’ve copied some other people, you know?”

In other Eddie Van Halen news, it was revealed last week that the guitarist left a seven-figure donation to music education in the United States. A statement was released on the website of Mr Holland’s Opus Foundation thanking the Rock N’ Roll Hall of Famer for the sum, noting that he had worked extensively with the charity before his death in late 2020.
Randy Rhoads: Reflection of a Guitar Icon will be released on 6 May, and features Ozzy Osbourne, Dweezil Zappa and more.
The documentary will be available to stream across iTunes, Amazon and other VOD platforms.
The post Randy Rhoads “rivalry” with Eddie Van Halen discussed in clip from upcoming documentary appeared first on Guitar.com | All Things Guitar.