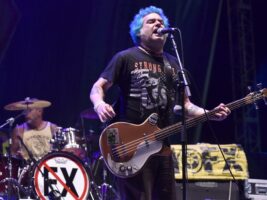 NOFX to break up following final run of shows in 2023, says Fat Mike

It appears that punk frontrunners NOFX will be breaking up following a run of farewell shows taking place in 2023.

READ MORE: Micky Dolenz of The Monkees reportedly suing the FBI over ‘heavily-redacted’ files on the band

In an Instagram reply to a Canadian fan asking when the band will return to the Vancouver or Edmonton areas, singer and bassist ‘Fat Mike’ Burkett said while the band loves Canada, “next year will be our last year”. Burkett added, “We will be announcing our final shows soon. It’s been an amazing run…”
He also revealed that the band plan to play their final show in Los Angeles in a reply to another fan, remarking, “That’s where we started, that’s where we’ll end.”
Credit: @fatmikedude / Fat Mike Official Instagram
NOFX have not made an official statement on Fat Mike’s claim of the break up, but word from the Fat Wreck Chords founder is as legitimate as it gets.
NOFX are due to celebrate their 40th anniversary next year. The band released their 14th studio album Single Album last year in February, which had many tracks clocking in over the two-minute mark – a first for the band.
In an interview with Guitar.com last year, Fat Mike revealed that Single Album was originally planned to be a double album, but the band eventually decided to cut the second disc; hence the album’s name.
“I was writing really different songs, and some fun songs, but you have to make a double album interesting enough to listen to the whole way,” Fat Mike reflected. “I wanted to make a perfect double album… I didn’t accomplish that.”
He also discussed his favourite guitar parts, naming I Love You More Than I Hate Me as one of his favourites due to the usage of all inverted chords on the E string in the track’s intro, a rarity in punk. “In punk rock, the three-string power chord is king. The chords I use in this song are very rare for the genre,” he mused.
The post NOFX to break up following final run of shows in 2023, says Fat Mike appeared first on Guitar.com | All Things Guitar.