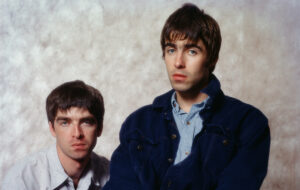 READ MORE: Noel Gallagher puts a price on an Oasis reunion: “I’ll do it for £100m”

Not our words but those of Cliff Jones when he interviewed Noel Gallagher for Guitar Magazine in September 1994. The rawness of Definitely Maybe is as stark now as it was then, even if the band’s later music failed to live up to the hype.
Since Oasis’s 1994 debut, countless teenagers across the UK have been inspired by a Union Jack Epiphone Sheraton or a Gibson Hummingbird to pick up a guitar and emulate that rowdy band from Manchester. How many guitarists have learnt Wonderwall as their first song?
These ten tracks, then, account for every face Oasis offered us over their 15 years as a recording band. Here, we uncover the guitar moments that made them tick.
Married With Children

This might be Oasis’s most underrated track. Coming at the end of Definitely Maybe, it responds to 11 tracks of shouting about how it could be with a melancholy song about how it is. The chord progression is quietly lovely, hanging on the E for about a week and then spicing things up with a B11. The melody is simple but endlessly charming.
Did you know?
The last line of the verse, Liam’s drawled, “Your music’s shite / It keeps me up all night,” is allegedly a quote from Noel’s then girlfriend, who didn’t appreciate Oasis writing songs deep into the evening.
Lyla

Make it basic, make it catchy and make it as loud as possible. It’s a formula that Oasis followed better than most, and Lyla is perhaps their best post-1995 attempt at it. The chord sequence is ridiculously catchy and the simplicity of the drums and lead guitar make this a fitting ode to rock music in its most unpretentious form.
Did you know?
Noel wasn’t a fan of Lyla initially but put it on Don’t Believe The Truth because there was no other obvious lead single. He later admitted he hadn’t appreciated how good the track was until they played it live.
Wonderwall

Let’s get this one out of the way. Yes, it’s a joke. Yes, it’s a travesty that this is their most famous song. But no number of memes and dodgy covers can take away from the mystery of that opening F♯m7. Wonderwall became a joke for a reason: it has one of the greatest chord sequences ever written on an acoustic guitar.
Did you know?
Both Bonehead and Liam were unsure about Wonderwall when Noel first presented them with the chords. In a 2020 BBC documentary, Bonehead said he thought “it sounded like a reggae song,” at first, while Liam said it was “a bit funky”.
Half The World Away

For all their guitar-smashing sibling-feuding bravado, Oasis were very good at slow, thoughtful acoustic songs. Most of this song hangs on a slow C to F progression and, combined with one of Noel’s best vocals, it makes for a genuinely mood-altering track. It speaks volumes about the songwriter’s output in 1994 that this didn’t make it onto Definitely Maybe.
Did you know?
Half The World Away was first released as the B-side for Whatever, Oasis’s only standalone single. It was later released on the 1998 compilation album The Masterplan, having been voted one of the band’s greatest B-sides. Noel has called it his favourite Oasis B-side too.
Rock ‘n’ Roll Star

Maccabees guitarist and lifelong Oasis fan Felix White recently wrote about how some of the Maccabees’ songs felt like the members were racing each other to the end. With Rock ‘n’ Roll Star, you can see where he might have got the idea. The star here is not Noel but the bushy-eyebrowed Bonehead, who urges the song forward with a simple but powerful rhythm performance.
Did you know?
In 2016’s Supersonic documentary, Noel claimed that Rock ‘n’ Roll Star was one of three songs that said everything he wanted to say – the others being Live Forever and Cigarettes and Alcohol – and that, after that, he was “repeating [himself] but in a different way”.
Morning Glory

How can a riff follow the sound of a helicopter and still make a song more aggressive? That eerie four-note riff continues throughout the song as it sprints along at a pace befitting that of Oasis’s hedonistic peak. There is a punchy solo at the song’s core that you can’t hear without picturing a room of Stone Island jackets and sunglasses bouncing around a 1990s nightclub.
Did you know?
Oasis have often been accused of borrowing music from elsewhere, and one of the opening riffs in Morning Glory does sound a lot like REM’s The One I Love. In this case, Oasis wrote the better song, so we’ll let them off.
Champagne Supernova

Away from the soot and smoke that comes with much of Oasis’s early work lies a much more mellow track. It’s a song that feels like it’s playing out underwater, and that calm and distance is what makes the guitar pop the way it does. A simple rising pentatonic riff creates that famous ethereal feeling, and it’s the guitars that break the dream with a crunching crescendo towards the end.
Did you know?
Speaking to SiriusXM in 2020, Noel said: “I haven’t got a clue [what Champagne Supernova means] but I was somewhere in the North of England and happened to glance up at the crowd. It was a sea of teenagers, all young lads with their tops off, singing the words to a nonsensical song from a band that broke up when they were two years old. I think to myself sometimes, that’s what it means.”
Supersonic

Rarely has an arpeggio seemed quite as sexy as it does in this intro. Supersonic oozes attitude and swagger. The pentatonic lick in the bridge screams like nothing else on this list, forming an angry dovetail with Liam’s snarled vocals. It was the band’s debut single – and they rarely topped it.
Did you know?
Supersonic was recorded largely by accident. The group had turned up to record Bring It On Down but became transfixed on a riff that Noel had found during a warm-up jam. It would become the iconic intro to Supersonic. According to Noel, he completed the song while the rest of the band took a break for a Chinese takeaway.
Live Forever

Oasis were masters at crafting end-of-night drunken-swaying songs, and this could be the greatest of them all. Noel follows the first chorus with perhaps his best guitar solo, using long bends and doublestops to give the track a distinct bluesy sound. The tone is perfect, with howling highs and crunchy mids.
Did you know?
For all the attitude and power of the original, this song is arguably at its best as an acoustic track. This Noel-only version on YouTube makes for as sensitive a track as any recorded by the band.
Slide Away

The Oasis manifesto. The strange way the internet works means this is far from the band’s most famous song but, on an album as full of mad in-your-face tracks about, well, sliding away, this one still stands out. It moves from guitar moment to guitar moment as Noel surrounds his brother’s intimate vocal with huge riffs that seem to pile in from all directions.
Did you know?
Slide Away was written on a 1960 Gibson Les Paul given to Noel by Johnny Marr, who in turn had received the guitar from Pete Townshend. Noel told Gibson.com that the song “wrote itself” once he had Marr’s guitar.
The post Oasis’s 10 greatest guitar moments, ranked appeared first on Guitar.com | All Things Guitar.