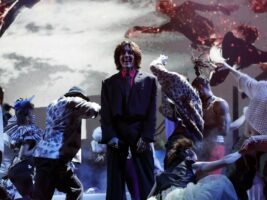 Bring Me The Horizon frontman Oli Sykes has shared his opinions on the return of alternative music to the mainstream, and has attributed some of the current health of the scene to Travis Barker and Kourtney Kardashian dating.

READ MORE: Herman Li says Kurt Cobain is “one of the best guitar players” in the world: “Expression is way more important than how fast you…

In a new interview with Kerrang! Sykes explained that he was excited about the diversity of bands and artists currently making a name from themselves while “celebrating the spectrum of rock music, from alternative acts to death and black metal” in a way that is less segregated than it was five to 10 years ago, adding, “You couldn’t be part of this because it’s not heavy enough, but I think people have given up on that.
“It might sound crazy, but one of the Kardashians dating someone from blink-182 [is a factor, too]. [And everything] is just a bit rockier now. You remember where Panic! At The Disco were five years ago and it all starts coming [back]. I think it’s all of these little things that have made it. Rock and alternative music are in the best place ever. I feel like it’s where it’s meant to be.”
Sykes concluded, “There’s so much excitement around rock and alternative music out there and it’s right where it needs to be.”
Sykes has already been involved in several collaborations that exemplify his excitement, including a hit collaboration with Ed Sheeran with their heavy take on Sheeran’s Bad Habits.

Sykes and BMTH also collaborated with Tom Morello last year on a single from his recent album The Atlas Underground Fire, the jumpy Let’s Get The Party Started.
“Bring Me The Horizon are really the current standard-bearer of hard rock and metal today, and thank God for them for that,” Morello said in a statement. “It was a real United Nations of metal coming together to produce this song, which really feels to me like it captures the angst and the frustration of the pandemic boiling over into an all-time mosh pit.”
The post Oli Sykes says “one of the Kardashians dating someone from blink-182” is helping rock music appeared first on Guitar.com | All Things Guitar.