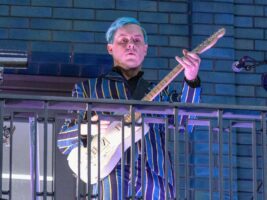 Jack White doesn’t care for White Stripes NFTs: “We allowed it to happen. But it didn’t really interest me”

Jack White has shared his opinion on NFTs, streaming being a great place for discovering music, and his role in the vinyl resurgence in a new interview.

Speaking to The Atlantic, White revealed his opinion on the Web3 trend that continues to permeate the music industry, saying, “It gives off a vibe of ‘Well, if people are stupid enough to give me money for this, I’ll take it.’ ”
When reminded that The White Stripes released NFTs last year featuring animations tied to a EDM remix of Seven Nation Army from 10 years, White explained, “I don’t want to come out and say ‘I had nothing to do with this’.
It is my band. We allowed it to happen. But it didn’t really interest me. It’s not something we’ll be doing very much of.”
White had more praise for the rise of musical communities on platforms like TikTok, Soundcloud and the like, describing them as almost having a “neighbourhood feel”.
Revealing that he listens to 90 per cent of his music digitally while discussing streaming as a venue for artist discovery, White also said sticking to only digital or only vinyl makes it hard to inspire audiences while admitting, “I know it’s not amazing money on streaming, but if vinyl hadn’t blown up over the last few years, it would be a lot more dire.”
White has previously praised singer Olivia Rodrigo, a noted White Stripes fan, for introducing vinyl to younger fans. White shared pictures of himself with the young pop-idol and a video of the two embracing along with the caption, “I had the chance to meet a talented singer and musician today named @OliviaRodrigo, she’s very cool, very real and very much a lover of music. She’s also introducing another set of youth to the love of vinyl records as well. Respect.”
Jack White also happens to be on the road and you can get tickets to see him here.
The post Jack White doesn’t care for White Stripes NFTs: “We allowed it to happen. But it didn’t really interest me” appeared first on Guitar.com | All Things Guitar.