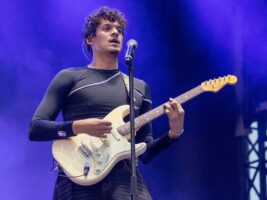 Omar Apollo on the difficulties of emerging as a new artist: “I see why these artists struggle on tours. It’s inhumane”

Newly emerging soul artist Omar Apollo has opened up about his time in the music industry thus far – explaining why he believes that touring can often feel “inhumane”.

After gathering rapid momentum as a new artist, over the past year, soul musician Omar Apollo has already become a TikTok sensation, a Grammy nominee and managed to sell out a show in L.A.’s notorious venue, the Greek Theatre.
However, in a new interview with the Los Angeles Times, the Indiana-born musician provided an insight into the ‘dark’ side of the industry, and explained why he is no longer willing to undergo such extensive touring schedules.
“It gets dark. I see why these artists struggle on tours. It’s inhumane,” he said. “I mean, it’s rewarding. You just have to really take care of yourself and learn how to do it.”
“Two tours in one year. I will never do that again. Your circadian rhythm’s all messed up. You have to take care of two little vocal folds in your throat to the point where you have to watch what you eat. It’s so strict. I miss eating late and not worrying about my voice,” he admitted.
In the discussion, the artist also elaborated on his difficult living circumstances when first moving to L.A. to pursue a career in music:
“[Being] from the Midwest, everything [feels] far-fetched. Then you move to L.A. and New York, and your friend is like, ‘Oh, yeah, my dad directed that movie’. But over there it’s like drugs or meth — that’s the vibe,” he explained.
“I lived with four people in an attic. Beds spread out. Then I had my studio up there [too],” he continues. “I’d tell them to please be quiet [but] you probably can still hear them in the recordings.”
Omar Apollo’s debut album, Ivory, is out now via Warner Records.
The post Omar Apollo on the difficulties of emerging as a new artist: “I see why these artists struggle on tours. It’s inhumane” appeared first on Guitar.com | All Things Guitar.