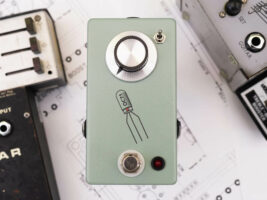 JHS Pedals released a limited-edition run of Germanium Boost pedals made from ultra-rare transistors yesterday (12 December) and sold out in less than ten minutes.

READ MORE: A Fender Thinline Telecaster Formerly Owned By Prince Is Up For Sale On Reverb

Yesterday, at 5 PM GMT, JHS unleashed what is now well in the running to be one of the fastest-selling guitar pedals of all time – a limited edition run of Germanium Boosts.
Created using super-rare transistors from the 1960s, the units were inspired by the Dallas Rangemaster pedal and designed to push your guitar amp into overdrive (while accentuating high-end frequencies) in the same way as an original amp-top box would. The original design first became popular after being used by countless famous names in rock, including Brian May, Eric Clapton, Marc Bolan and Tony Iommi.
Sporting a surprisingly humble design, all 700 of the single-knob stompboxes sold out within the hour – seven minutes to be exact – and expensive second-hand listings are predicted to be emerging online soon.
Featuring one footswitch, one dial to control gain and a toggle switch that selects between a classic voicing and a thicker-sounding contemporary sound, JHS ensures that while it is “easy to overlook” the unit’s appearance, the sound of the pedal will be “impossible to ignore”.

The units sold for $249 each, just a fraction of the cost of the original Dallas Rangemaster, which can sell for up to $4000 in the current market, although modern recreations using slightly less rare components can be found for less than $100
Two variants of the Germanium Boost were on offer, the first featuring an AC128 transistor in the circuit and the latter being even rarer, incorporating an OC71-based circuit.
On JHS’s website, the brand confirms that the rare transistors were sourced from a “private stash in England” and those lucky enough to get their hands on one can expect “blistering, sustaining guitar in the same vein as We Will Rock You.”
Find out more about the Germanium Boost pedals on JHS’s website.
The post JHS’ $250 treble booster using “almost extinct” germanium transistors sells out within 7 minutes appeared first on Guitar.com | All Things Guitar.