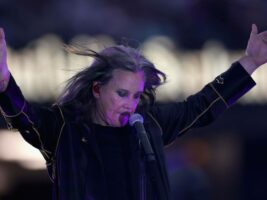 Ozzy Osbourne is unsure whether he can perform at upcoming shows: “I just can’t fucking walk much now”

Ozzy Osbourne has spoken out about his deteriorating health in a new interview, admitting that he is uncertain whether he will be able to perform live due to his difficulty walking.

In the discussion with SiriusXM, the Black Sabbath frontman opened up about his health struggles and the impact it may have on his upcoming live performances. “I have never been ill this long in my life,” he said.
It was here that the Prince of Darkness revealed that he is still having difficulty walking, six months after he had surgery on his spine. Recalling his ‘frustration’ at his lack of mobility, he stated:
“I can’t begin to tell you how fucking frustrating life has become,” he said. “It is amazing how you go along in life and one stupid thing can screw everything up for a long time. I have never been ill this long in my life. Even when I was a downbeat drunken drug addict I would not be out this long.”
Osbourne, who had been diagnosed with Parkinson’s Disease previously, was urged by doctors to undergo the procedure to prevent a life-altering disability. “That surgeon told me if I didn’t have the surgery there would be a good chance I would be paralysed from the neck down,” he recalled.
Discussing how this slow recovery may affect his career, the 73-year-old vocalist admitted that he is uncertain whether he will be able to perform at the performances scheduled for 2023.
“The thing is, my head is all right. My creativity is OK. My singing is OK… but I just can’t fucking walk much now.” he stated. “It is so fucking tough because, I mean, I want to be out there. I want to be doing it.”
The post Ozzy Osbourne is unsure whether he can perform at upcoming shows: “I just can’t fucking walk much now” appeared first on Guitar.com | All Things Guitar.