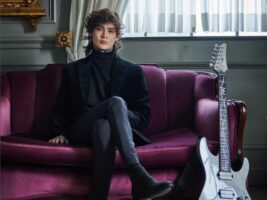 Tim Henson has spoken out on the influence that TikTok is having on the younger generations – praising the platform as allowing guitarists to gather momentum without having to resort to gimmicks.

The Polyphia guitarist was speaking to Loudwire as part of a new interview on Friday (8 December) when he shared his thoughts on the platform. It was here that Henson admitted that he appreciates how TikTok is encouraging a new generation of listeners to listen to guitar-heavy tracks from the 1980s and 1990s.
“The longer I’m alive, the more trends I watch, come and go,” he explained. “It’s just an interesting thing to see it happen, you know? I remember hearing about the ’80s and the ’90s thinking like… ‘that’s some dinosaur shit’ [just because] I wasn’t there for that. That’s what these kids think about 2010 now.”
“It’s like the kids just discovering that guitars do exist, [after] not having existed on the radio for so long. It’s cool to see that coming back.”

In the interview, Henson also compared how younger audiences are now receptive to technical playing and cover videos than he was when he was a teen.
Comparing the types of guitar-related content that would trend on YouTube in comparison to TikTok, the guitarist noted how talented players often went overlooked on YouTube due to an emphasis on gimmicky videos:
“[Previously, on YouTube] it kind of died off… People that would upload themselves playing Pantera solos – but nobody really cared,” he noted.
“When YouTube started, it took the guy to make a rock version of a classical piece to be recognised. Now, you get on TikTok, and you see a kid doing the AC/DC Thunderstruck – and people are losing their fucking minds!”
The post Polyphia’s Tim Henson praises TikTok for getting Gen Z to appreciate guitar music appeared first on Guitar.com | All Things Guitar.