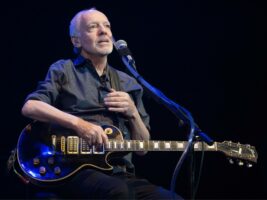 Guitar virtuoso Peter Frampton has opened up about his choice to leave Humble Pie and admitted that he originally worried that going solo would be the biggest mistake of his career.

READ MORE: Peter Frampton On Touring With David Bowie: “I Got My Credibility Back That I Felt I’d Lost”

Speaking as part of an interview with Guitar World last week (8 December), Peter Frampton discussed his origins as a guitar player, and provided an insight into the reasons behind his departure from Humble Pie.
“I just felt that the way we were going, which I loved, was a little harder-edged,” he said, explaining his choice to pursue a solo career in 1971. “I think I was coming into my own.”
In the discussion, the guitarist confessed that he knew that the band were about to release one of their most successful records, but left regardless due to an overwhelming urge to make his own career choices.
“Even though I knew that Rockin’ The Fillmore would be our biggest record so far […] I just decided in the end that this would be the best time, before they really break,” he explained. “Otherwise, if I had stayed in the band, I would have still been in Humble Pie, I think. It was just I wanted to be in charge of my own destiny finally.”
Elsewhere in the discussion, the guitarist also admitted that up until the release of his 1976 album, Frampton Comes Alive! – which was certified gold after selling 500,000 copies – he worried that he had jeopardised his career by departing the band so early:
“[It was] surreal because four or five years beforehand I thought I’d made the biggest mistake of my career by leaving Humble Pie because Rockin’ The Fillmore was jumping up the charts all over the world,” he explained.
“It was all up to me at that point, I realised. I thought, ‘If I play my cards right and I go out and do a lot of touring for this, maybe this will be my first gold record.’ A week later it was a gold record. It came out and just exploded.”
The post Peter Frampton says he originally thought going solo was “the biggest mistake” of his career appeared first on Guitar.com | All Things Guitar.