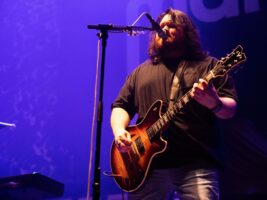 Wolfgang Van Halen has spoken out about the impact that online trolls have had on his mental health and admitted that negative comments have resulted in him suffering from depression and anxiety more than ever before.

READ MORE: Wolfgang Van Halen On the Legacy Of WVH: “He Never Half-Assed Anything”

In the latest edition of Guitar World, Wolfgang Van Halen discussed his attitude towards writing new music for Mammoth and explained how the process has changed since he first began the project seven years ago.
“I’m a very different person. [2015] Wolfie has been through a lot of shit to become the Wolfie I am today, especially in the last three years,” he said.
Elaborating, Wolfgang elaborated on how these changes stemmed from his mental health struggles – which include depression and anxiety, and are often heightened by the backlash he receives on social media.
“I don’t think my emotional and mental well-being have been any lower,” he confessed. “It’s a thing that is incredibly tough to fight… There’s many times when I don’t have the strength to do anything, and more than not, that seems to be the case. But you’ve got to find the things that give you life.”
Elsewhere in the discussion, the guitarist also offered his advice to those struggling with similar issues, explaining that the feeling of loneliness is more widespread than some realise:
“When it comes to people who feel the same way I do, dealing with depression and anxiety, you never really are alone. Unfortunately, it’s like we’re all alone together, because so many of us feel this way.”
He continues, “When it comes to dickheads on the internet, that’s always there. Everyone deals with it. Sure, it hurts a lot when it’s directed toward you, but you’ve got to realize the place it’s coming from. I like to pick my battles.”
The post Wolfgang Van Halen says his mental health has ‘never been any lower’ due to internet trolls appeared first on Guitar.com | All Things Guitar.