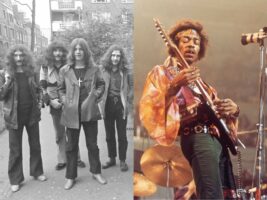 Ozzy Osbourne says Geezer Butler thought Jimi Hendrix was “Crap”: “I think he was taking a different drug than me”

Ozzy Osbourne has provided insight into Black Sabbath’s first impressions of Jimi Hendrix in a new interview, confessing bassist Geezer Butler was initially less than impressed by the guitar prodigy.

READ MORE: Zakk Wylde on hearing Black Sabbath’s music for the first time: “I was beyond terrified”

Speaking with Rolling Stone yesterday (September 14) in light of the release of his most recent album, Patient Number 9, Ozzy Osbourne has shared anecdotes from the early days of Black Sabbath – most notably, the band’s first impression of Jimi Hendrix.
Reflecting upon first seeing the musician perform in Woburn, England in 1968, the same year Black Sabbath formed, the frontman says:
“I seem to remember Jimi was great, but Geezer Butler said he was crap!” He continues, speculating that it may have been the band’s different preference for narcotics at the time that led to the contrary opinions, “I don’t know, mate. I think he was taking a different drug than me, but we were only kids.”
Progressing to list other musicians who influenced the band’s sound, Osbourne also names Led Zeppelin as a vital reason why Black Sabbath chose to pursue “heavy” music.
Confessing that their original choice of genre was jazz blues in the interview, the frontman says that when the members first began playing, their music was similar to that of Fleetwood Mac – until the classic rock legends changed their outlook.
“When I heard the first two Zeppelin albums, I thought they were fucking unbelievably good,” he says. “I told Tony, ‘They’re fucking heavy’ [and] he said, ‘We’ll be heavier,’… and he fucking was right.”
He continues, “One of the earliest things we did was [sings three notes to ‘Black Sabbath’]… That was like, ‘Fuck me, that’s good.’”
Elsewhere in the interview, Osbourne also discussed Randy Rhoads’ controversial opinion on Eddie Van Halen, stating that the two were “rivals”.
The post Ozzy Osbourne says Geezer Butler thought Jimi Hendrix was “Crap”: “I think he was taking a different drug than me” appeared first on Guitar.com | All Things Guitar.