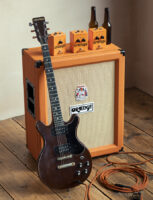 The modern story of these classic units starts in 2019, when an Orange message board went viral for a photo of the long-discontinued Sustain pedal from the early 1970s, with its outsized form-factor and art nouveau typography. Not long after, the company found the original schematics and the project was started.

The rest of the story writes itself: as more evidence was unearthed about the Sustain and its two brothers, the Distortion and Phaser, Orange set about remaking these beasts, retaining their most-loved qualities and incorporating the contemporary features; LEDs, DC inputs etc — expected on 21st-century effects pedals. The result is three seasoned British made pedals re-tuned and ready for the modern age.

First up is the Orange Sustain, which smooths and regulates guitar sounds, acting like an overdrive for clean tones with added chime and warmth. Boosting volume without scuffing purity and making soft parts louder and the loud parts softer, it offers an expressive, nuanced and three-dimensional take on the sustain/compressor effect.

Then there’s the Orange Phaser, the most elegantly simple of the reboots, with just one knob and one job: to bring sweet psychedelic swirl to any rig, its dial modulating guitar tones from woozy sweeps to fast, choppy stabs via kaleidoscopic insistent, whirling pulses. With four-stage circuitry rebirthed from the original schematics combined with modern techniques inside the box reduces the noise floor. The Orange Phaser adds maximum spin with minimum fuss.

And finally there’s the Orange Distortion, with vintage appearance up top but all-new circuitry below deck, replacing the original’s back-to-back diode design with an amp circuit and tone stack with a user-adjustable treble. New design doesn’t mean new sound though — the Orange Distortion retains all the bite, growl, warmth and howl of its 1970s forefather, from fat gravelly textures to red-hot screamers and maximum saturation.

The trio of effects pedals are a perfect homage to one of rock’s golden ages, but also ripe for any modern set-up. The strong aluminium chassis and classic look offer a 50-year-back teleportation. Then, stomping on the footswitches completes the time-travel: these might be new for 2022, but with the Orange vintage pedals, The Song Remains The Same.

To find out more about all these British made pedals, please go to orangeamps.com.