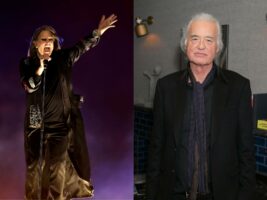 Ozzy Osbourne has admitted that he unsuccessfully attempted to recruit Jimmy Page on his upcoming album, saying he wanted the release to feature some of the most renowned guitarists of all time.

READ MORE: Dee Snider Loved Queen So Much He ‘Embarrassed’ Them At One Of Their Earlier Shows

Speaking in the latest edition of Metal Hammer, the Black Sabbath frontman says that when recording his upcoming album, Patient Number 9, he contacted Jimmy Page to take part. Yet, despite already recruiting classic rock legends Eric Clapton and Jeff Beck to guest star, Osbourne says he never heard anything back from the Led Zeppelin guitarist.
“I don’t even know if he plays anymore, but I thought getting Eric Clapton, Jeff Beck and Jimmy Page meant having the greatest guitarists on the planet,” he says, explaining why he pursued such a star-studded lineup for the album. “But I never heard from him. Maybe he’d lost his phone or something!”
Patient Number 9 is set to be released next month and features names including Guns N’ Roses’ Duff McKagan, Metallica bassist Rob Trujillo and, most notably, the late Foo Fighters drummer, Taylor Hawkins.
In addition, the album sees the return of ex-Ozzy Osbourne guitarist Zakk Wylde for the first time since 2007 and a guest appearance from Black Sabbath bandmate, Tony Iommi.
Speaking about the two singles which feature Iommi, Degradation Rules and No Escape From Now, the frontman also says he believes the songs would have become Black Sabbath Singles if the remaining members of the band were willing to take part.
“Those Tony Iommi tracks, especially No Escape From Now… if Geezer [Butler, the band’s bassist] and Bill [Ward, the band’s drummer] had played on them, [they] would have made fucking great Sabbath tracks,” Osbourne says.

Earlier this month, Ozzy Osbourne and Tony Iommi made a surprise appearance at the 2022 Commonwealth games in their hometown of Birmingham, where they played two of their Black Sabbath classic tracks, Paranoid and Iron Man.
Ozzy Osbourne’s upcoming album, Patient Number 9 is due to be released on September 9 via Epic Records.
The post Ozzy Osbourne says Jimmy Page never returned his calls about being on his new album appeared first on Guitar.com | All Things Guitar.