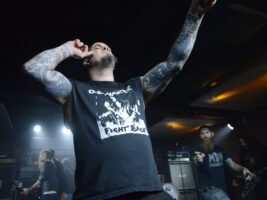 The first four dates for Pantera‘s 2022 reunion tour have been announced, which includes three Knotfest dates in South America.

In a brief Twitter statement posted on 25 August, Pantera revealed they will be performing at Knotfest Colombia this 9 December, Knotfest Chile on 11 December and Knotfest Brasil on 18 December. The band also later revealed an appearance at Heaven & Hell Metal Fest in Toluca, Mexaco this 2 December.
No additional tour dates have been announced at the time of writing.

It was previously announced earlier this year in July that surviving Pantera members vocalist Phil Anselmo and bassist Rex Brown would be reuniting for a tour in 2023. The duo reported signed a deal Artist Group International to book their upcoming North American dates, with Zakk Wylde and Anthrax drummer Charlie Benante set to fill in for the late “Dimebag” Darrell Abbott and drummer Vinnie Paul Abbott, respectively.
Ironically, Brown told podcaster Paolo Baron last year that in no uncertain terms that a rumoured comeback with Wylde on guitar was not happening. “It’s going to come up, and it wouldn’t be Zakk Wylde, I guarantee you that. I’ve just put it out there so we can get on past it.”
Wylde has said he is “beyond honoured” to be a part of a celebration of the band’s musical legacy. “When Vinnie [Paul] was still alive, when the fellows were all talking about doing it, I just always told ’em, I said, ‘Guys, of course I would… If you asked me, why would I not do it? I’m gonna honour Dime,’” Wylde said.
“It’d be like Noel Redding and Mitch Mitchell asking Eric Clapton if he would go out and honour Jimi [Hendrix] and Eric playing Jimi’s stuff and singing Jimi’s songs and they’re going out as The Jimi Hendrix Celebration.”
The post Pantera announce first reunion dates for 2022, with Zakk Wylde and Anthrax’s Charlie Benante appeared first on Guitar.com | All Things Guitar.