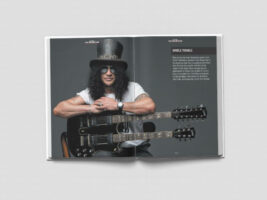 Slash made an appearance at a lesser-known guitar shop in the small town of Morecambe in Lancashire in July this year, where he purchased an unknown guitar. Once receiving the purchase, the musician once again contacted Promenade Music, thanking the employees for their service and stating that he wished he knew about the store when recently embarking on his tour of the UK with Guns N’ Roses.
The exact model bought still remains a mystery, but fans on social media have speculated that the order may have been a pedal steel guitar.
The post Gibson Publishing launches Slash coffee table book exploring his guitars as first title appeared first on Guitar.com | All Things Guitar.