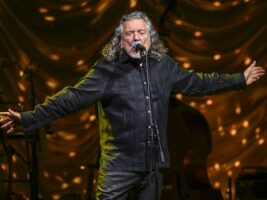 Led Zeppelin frontman Robert Plant has shared that the band’s iconic track Stairway to Heaven makes him feel “overwhelmed” when he listens to it.

In a new interview with Rolling Stone, Plant discussed the song’s meaning, saying, “When I hear it in isolation, I feel overwhelmed for every single reason you could imagine.”
“There was a mood and an air of trying to make it through,” Plant explained. “The world is a different place. Everybody was reeling from Vietnam and the usual extra helping of corruption with politics. There were people who were really eloquent who brought it home far less pictorially and did a much better job of reaching that point. But I am what I am, and as my grandfather said, ‘I can’t be more ‘am’-erer.’”
Plant also discussed if he thought audiences had understood the meaning of the song. “I have no idea. I mean, it was such a long time ago. I used to say it in Zeppelin, ‘This is a song of hope,’” Plant said. “And it’s crazy, really, because it was gargantuan at the time. The musical construction was, at its time, something very special, and I know that Jimmy and the guys were really, really proud of it, and they gave it to me and said, ‘What are you going to do about this?’”
“So I set about trying to write something which I suppose drops into the same idiom as something like The Rover later on, or maybe Rain Song, something where there’s some optimism and reflection from someone who was really not [old]. I was 23 or something like that.”
Plant has previously revealed that he has assembled a large personal archive that will only be released after his death. The archive also includes unreleased music from a number of personal projects, as well personal items from his collection like a letter from his mother. “I’ve told the kids when I kick the bucket, open it to the public free of charge,” Plant said of his archive.
The post Robert Plant says he feels “overwhelmed” when he listens to Led Zeppelin’s Stairway to Heaven appeared first on Guitar.com | All Things Guitar.