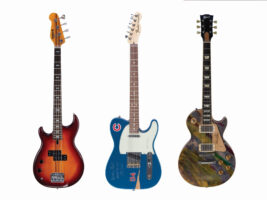 Over the weekend, a gigantic auction of guitars and other memorabilia took place in aid of Music Rising, the charity founded by U2 guitarist The Edge and producer Bob Ezrin. The auction raised over $2 million for the charity, set to go towards New Orleans musicians who have been impacted by the COVID-19 pandemic and by Hurricane Ida.

The full auction featured instruments and other items donated by a laundry-list of A-listers: Joan Jett, Lenny Kravitz, Noel Gallagher, Ronnie Wood, Slash, Paul Stanley, Flea, Billie Joe Armstrong, to name just a few. Among the items donated was a bass guitar owned and played by Paul McCartney in his post-Beatles band Wings – this broke the auction price record for a bass guitar, fetching a rather sizeable $471,900. The record was previously held by Bill Wyman’s bass guitar, which sold for $384,000 in 2020.
Another record was smashed by, well, a smashed guitar, when Eddie Vedder’s Telecaster broke the record for the most paid for a smashed guitar at auction. It sold for an undisclosed amount. These record-breaking sales combined with the huge amount of items being sold led to the auction bringing a total of over $2 million.
The Edge said in a statement: “We want to thank everyone involved in this amazing auction including the artists who generously gave their personal instruments and the bidders from around the globe who helped us break world records. The proceeds Music Rising earned will help bring live music back to life in a part of the country whose musical culture has been hugely influential in the world. We are indebted to all of the supporters of Music Rising who have given us a great opportunity to return to our roots and help those musicians in need. We thank you.”
Bob Ezrin added: “Wow, what an auction. We are so thankful to all of the artists, supporters and bidders who helped make Guitar Icons an auction for the history books,” before noting that the auction raised its impressive total in just a few hours.
“New Orleans musicians are the custodians of a unique musical heritage, passing it down through the generations and influencing so many genres of music we enjoy. The proceeds from this auction will help musicians from the region who suffered financially through this pandemic. Thank you so much for your support.”
The post Paul McCartney’s Wings bass breaks record with $471,000 sale, and other highlights from The Edge’s Music Rising auction appeared first on Guitar.com | All Things Guitar.