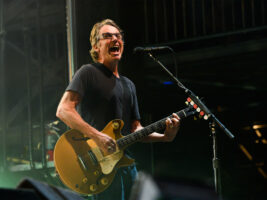 Pearl Jam are working on a new LP, says Stone Gossard: “We’ve recorded some songs. We’re on our way”

Pearl Jam are already working on a follow up to 2020’s Gigaton, according to guitarist Stone Gossard in a new interview.

Speaking to Consequence Of Sound yesterday (21 March), Gossard reported that progress on the new album has begun: “We’ve recorded some songs. We’re on our way. We’re making music.”
The new album will be produced by Andrew Watt, who took home Producer Of The Year at the 2021 Grammy Awards. Some of his latest credits include Maroon 5’s Jordi, Ed Miley Cyrus’ Plastic Hearts and Pearl Jam frontman Eddie Vedder’s latest solo entry, Earthling.
“We’re psyched,” Gossard told Consequence. “Andrew is a total character. Really, like immediately, we were writing quickly. Spontaneously. Bring in a riff. Let’s knock it out. [Drummer] Matt Cameron is playing his ass off. We didn’t bring any gear down. We were just doing some recording in Andrew’s basement in Beverly Hills, basically. So far, so good.”
“I want to keep staying in that state of mind where we make looser records, and are quicker in terms of being able to generate that feeling or art. [We] constantly are asking: What is another process? How is it that we can do something new? What’s the next step? Just speaking with [bassist Jeff Ament] the other day, we’re talking about trying different formations of how to generate song ideas, particularly ones that move us, that move us in a cool direction, or in a direction that makes people go, ‘Ah!’”
Pearl Jam released Gigaton back in 2020, but COVID-19 threw a wrench in the Seattleite rockers’ plans to tour that year; they will finally be embarking on the trek later this May.
In September 2021, former Red Hot Chili Peppers guitarist Josh Klinghoffer officially joined Pearl Jam’s live lineup, performing his first show with the group at the Sea.Hear.Now festival in New Jersey’s Asbury Park.
Last week (15 March), Klinghoffer told Spin that he will be taking his solo project, Pluralone, on the road with Pearl Jam in the coming Gigaton tour.
“I’m traveling with those guys because I’m playing with them, so it would be logistically difficult to bring other people,” Klinghoffer told the publication. “I never wanted to be a solo performer, or, at least, to start as a solo performer.”
“What I’ve got coming up is a big step forward for me, and fucking nuts to imagine doing, but I’ll do it. From things those guys have graciously said, I can imagine there being some special guests from the pool of musicians that will be in the building anyway.”
The post Pearl Jam are working on a new LP, says Stone Gossard: “We’ve recorded some songs. We’re on our way” appeared first on Guitar.com | All Things Guitar.