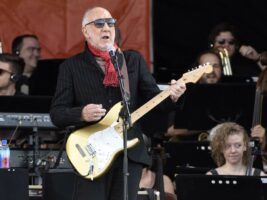 Pete Townshend almost left The Who before Keith Moon died: “I needed to go on in his memory”

The Who‘s Pete Townshend says he almost quit the band before drummer Keith Moon passed away in 1978 in a new interview.

The guitar legend was speaking on a two-hour episode of Music+Words on Audible, where he recounted the time between the death of Moon in 1978 and bass guitar player Jon Entwistle’s passing in 2002.
Townshend shared that he had almost left The Who due to Moon’s drug addiction issues causing the drummer’s performance to decline, saying, “I had decided to leave The Who, I had decided when we did the Who Are You album.
Keith played drums on a song called Music Must Change, and it was in 6/8 time. All he had to do was go, [sings simple melody], and he couldn’t do it.”

Relating that the band had eventually given up and created a soundscape using footsteps and tossing a coin on the ground, Townshend remarked that there was a huge contrast between Moon’s work on the title track of the album and Music Must Change.
“…He played the most fantastic drums [for Who Are You], which was only recorded about six months before,” Townshend said. “I went back and realised that Keith was just not going to cut it really, at all, ever again. We sort of lost him. I decided to quit.”
Moon’s eventual passing changed Townshend’s mind, however, as he felt he needed to honour Moon by carrying on. Adding that the opportunity to do something new also excited him about the prospect of staying with the band, Townshend also recalled that frontman Roger Daltrey found it difficult as  “he felt Keith was his primary connection in the band, musically speaking.”
“[Moon] wasn’t a conventional drummer. He was an embellisher, a decorator, almost like an orchestral drummer, but he certainly wasn’t a Kenney Jones who laid down a really good beat.”
Audible’s Music+Words series has featured 26 other artists so far, including Eddie Vedder, Tom Morello, Billie Joe Armstrong, and Alice Cooper.
The post Pete Townshend almost left The Who before Keith Moon died: “I needed to go on in his memory” appeared first on Guitar.com | All Things Guitar.