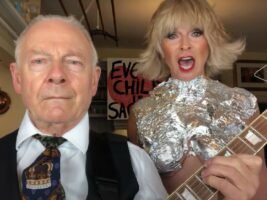 While the performance comes with all the bells and whistles we’ve come to expect from the couple’s popular cover series, including Toyah repurposing tinfoil to create her eye-catching ensemble for the week, Fripp makes sure to remind the audience that Zombie was written for a serious purpose by looking straight into the camera to deliver the duo’s dedication.
“Hope and love to children in danger everywhere from Toyah and Robert’s Sunday lunch,” Fripp says soberly before launching into the cover.

Zombie was released by The Cranberries in 1994 following the killing of two children in the Cheshire town of Warrington after the Provisional Irish Republican Army planted explosives in a litter bin. Singer Dolores O’Riordan wrote the song in her hometown of Limerick, Ireland upon her return from a UK tour, perhaps never imagining she would perform it live at the 1998 Nobel peace prize awards ceremony honouring Northern Ireland peacemakers SDLP leader David Trimble and Ulster Unionist leader John Hume.
The pair’s popular Sunday Lunch series has seen them cover Michael Jackson and Slash’s Give In To Me, Neil Young’s Rockin’ In The Free World, Black Keys’ Lonely Boy, Smashing Pumpkins’ Bullet with Butterfly Wings and Billy Idol’s White Wedding among other fan-favourite hits.
Fripp recently made headlines when commenting on a lawsuit from King Crimson mechanical rights holder Declan Colgan Music Ltd over underpayment of royalties for a King Crimson sample used in Kanye West’s 2010 hit single Power.
“There is a longer story to be told,” Fripp wrote on his Facebook account at the time, “and likely to astound innocents and decent, ordinary people who believe that one is paid equitably for their work, and on the appointed payday.”
The post Robert Fripp and Toyah dedicate cover of The Cranberries’ Zombie to “children in danger everywhere” appeared first on Guitar.com | All Things Guitar.