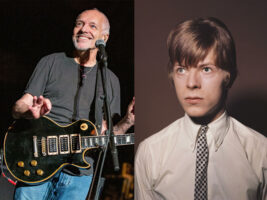 Peter Frampton on how schoolmate David Bowie influenced his musical journey: “The Kon-Rads made a huge impression on me”

Peter Frampton has spoken about how an early friendship with David Bowie led to some of his early musical experiences, when the two were students at Bromley Technical School, where Frampton’s father taught art.

READ MORE: Billy Corgan says Black Sabbath was the “blueprint” for his music: “I’ve chased that sound my whole life”

Bowie, three years Frampton’s senior, was an early jamming buddy of Frampton’s – as was George Underwood, the visual artist who not only designed covers for Bowie’s albums in the 70s, but who gave Bowie his signature mismatched eye colours during a fight over a girl.
Frampton told Classic Rock that his father, Owen Frampton, was particularly “instrumental” in the three music friends coming together.
“My dad said: ‘Why don’t you all bring your guitars to school? We can stash them in my office before assembly in the morning, then at lunch time you can get them out and play’,” Frampton said.
“We’d play Buddy Holly, Eddie Cochran, whatever was American.”
Remembering Bowie from those days, Frampton said his work with The Kon-Rads made “a huge impression” on him. He also noted how Bowie’s flair for the theatrics showed up way before he was Ziggy Stardust or the Thin White Duke.
“There he was with his suit and his hair sticking up, playing sax and singing Little Richard songs,” Frampton recalled. “I thought: ‘I want to be him!’ But I had already started playing a few years before. I picked up the banjolele first, then got a guitar for Christmas when I was eight.”
“I remember my dad coming home from school one day – this was before I met Dave – and saying to my mum: ‘You know, Peggy, there’s something very strange about that Jones boy.’ And I’m all ears. ‘Because on Friday, I’d swear he had eyebrows’. So I think David was already being different.”
The post Peter Frampton on how schoolmate David Bowie influenced his musical journey: “The Kon-Rads made a huge impression on me” appeared first on Guitar.com | All Things Guitar.