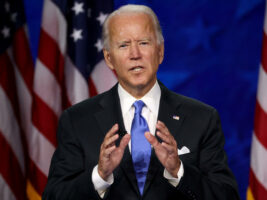 Concert goers might soon say goodbye to those pesky ‘hidden fees’ that accompany ticket purchases according to a recent announcement from the Biden administration.

In a speech last Wednesday (26 October), President Biden outlined his plan to crack down on those surprise fees that “benefit big corporations”, saying, “One of the key things I’ve asked the council to take on was the unfair hidden fees known as ‘junk fees’ that are taking real money — real money out of your pockets — real money out of the pockets of American families.”
Examples of such junk fees include banking overdraft fees, excessive credit card late fees, hidden fees consumers are forced to pay on hotel bookings and cable bills, and processing fees tacked onto concert tickets.
The President called such practices “unfair,” describing them as “surprise charges that companies sneak into bills because they can”.
He added that these fees make up “tens of billions of dollars in revenue” across the various industries, and noted that the administration is “just getting started” in tackling them.
A follow-up tweet this week (3 November) also assured consumers of the crackdown to come: “I know hidden junk fees — like processing fees on concert tickets — are a pain,” the President wrote. “They’re unfair, deceptive, and add up. That’s why, last week, I called on my Administration to crack down on these fees and put that money back in your pocket.”

I know hidden junk fees – like processing fees on concert tickets – are a pain.
They’re unfair, deceptive, and add up.
That’s why, last week, I called on my Administration to crack down on these fees and put that money back in your pocket.
— President Biden (@POTUS) November 3, 2022

The measures — should they come into fruition — would stand to affect ticketing platforms like StubHub and Ticketmaster, both of which are known to charge a service/ processing fee on top of their ticket prices. The latter in particular, has come under fire for allegedly causing soaring ticket prices due to its “dynamic pricing” strategy.
The recent Blink-182 reunion tour is one such example, with Billboard reporting that ticket prices have hit an upwards of $600 for pit seats. Bassist Mark Hoppus shared that he too had attempted and failed to get tickets for the band’s upcoming concert, saying, “I had tickets yoinked from my cart and the whole thing crashed out.”
The post Joe Biden promises to crack down on concert ticket ‘junk fees’ appeared first on Guitar.com | All Things Guitar.