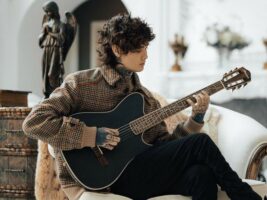 Polyphia has opened up about how they intend to perform those wild guitar gymnastics of their newest album at live shows.

READ MORE: Polyphia’s Tim Henson on the mundane side of guitar-centred metal: “Literally everything is just solos on solos on solos”

In a new interview with Guitar World, members Tim Henson and Scott LePage were asked “how on earth” are they going to play those brutal fretboard theatrics we hear on their latest tracks, to which LePage replied: “That’s what we’re figuring out right now. I’d say we’re going to play half the new record live.”
“The songs we’re doing aren’t impossible – they’re just really difficult. In the past, we recorded some songs we knew we wouldn’t play live, so our attitude was, ‘Let’s just make it sound cool and do some crazy weirdo shit on it. We didn’t really do that on this album.”
“I would say we did,” Henson chimed in, “but we figured out ways around it. If there’s a will, there’s a way. And we have the will. We get there by practicing a shit ton every day.”
The guitarist also laughed at an old statement he once made whereby he claimed that he doesn’t practice, saying “Yeah, fuck that!”
“We practice so much now. Before we had this ‘We are the most unprofessional professional band’ shtick, but now that we’re older and this is very much our livelihoods, we take it very seriously,” he explained.
“Our stuff is very difficult to play, and we don’t want to disappoint our fans. The last thing we want is to bite ourselves in the ass. Saying we didn’t practice was one of those shit-ass statements we made a long time ago.”
As for what each practice entails, Henson said that “We have to get good at playing our own songs.”
“A lot of these songs are our most difficult things ever. Some of the vocal tunes are pretty easy, but the rest of the stuff, the instrumental songs, are by far the hardest things we’ve had to play; they require a lot of attention to detail.”
LePage added, “Playing God is the obvious one. Neurotica is another one — it’s got a crazy-fast solo part. The rest of my parts are very expressive, and I try to stay within the picked harmonics. I try to stay true to what I did on the record, and I want each part to come off with its own sound when I play live.”