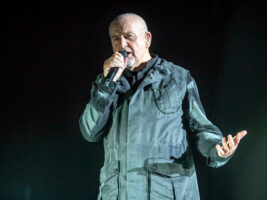 The solo artist recently confirmed that he will be hitting the road in Europe next spring. ‘The i/o Tour’ — named after his forthcoming album of the same name — marks Gabriel’s first concert since his 2016 tour with Sting and his first solo headlining show since 2014’s Back to Front Tour.
The tour is set to kick off in Krakow, Poland on 18 May 2023, with dates in Italy, France, Germany, Denmark, Sweden, Norway, The Netherlands, Belgium, Switzerland, and the UK before wrapping in Dublin, Ireland on 25 June 2023. A North America leg of the tour will continue in the late summer/fall with dates and ticket information to follow.
According to a press release, the setlist will include new music from Gabriel’s upcoming album i/o, as well as hits and fan favourites from the artist’s extensive catalogue. Gabriel will also be joined by regular bandmates Tony Levin, David Rhodes and Manu Katché onstage.
“It’s been a while and I am now surrounded by a whole lot of new songs and am excited to be taking them out on the road for a spin,” the singer said. “Look forward to seeing you out there.
Tickets to the tour go on sale this Friday (11 November). Fans who are signed up to Gabriel’s mailing list can access the pre-sale starting today. The full list of dates is available at petergabriel.com

Genesis, the prog-rock outfit of which Gabriel was a founding member, recently sold their publishing rights and master recordings in a $300 million deal with Concord Music.
The deal gives the company ownership of the solo career catalogue of Phil Collins, Tony Banks and Mike Rutherford, as well as the music they recorded together as a band. Music from their period with Gabriel or his solo material, however, was not part of the sale.
The post Peter Gabriel’s first tour in seven years begins in Europe next Spring appeared first on Guitar.com | All Things Guitar.