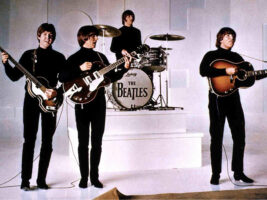 Lord of The Rings director Peter Jackson has revealed he is currently working on another Beatles film following his Disney+ three-part docuseries, The Beatles: Get Back.

READ MORE: How Peter Jackson used AI to strip out the guitars and uncover The Beatles hidden studio conversations on Get Back

In a new interview with Deadline, Jackson revealed the project is “not really a documentary”, explaining he was in conversation with surviving Beatles Paul McCartney and Ringo Starr “about another project, something very, very different than Get Back”.
“We’re seeing what the possibilities are, but it’s another project with them,” Jackson hinted.
Elsewhere in the interview, Jackson also talked about his role in providing McCartney with the cleaned-up vocals from John Lennon‘s rooftop performance of I’ve Got A Feeling, revealing he had the idea of McCartney being able to ‘perform’ alongside Lennon again when he first started work on Get Back four years ago.
“We had access to all that footage, and to do something like that, you need the footage,” Jackson explained. “The shots have to be right. I didn’t mention it to Paul. I thought, ‘Suggesting to Paul that he sing onstage with John, he’s going to think I’m a fanboy geek idiot.’”
Jackson eventually attended a concert of McCartney’s before the pandemic forced lockdowns worldwide, filming the performance for I’ve Got A Feeling so he could head to the studio and piece together a “simple CGI proof of concept” to pitch to McCartney. In the ensuing lockdowns that followed, however, Jackson did not have the opportunity to pitch his idea to McCartney.

“I’d gotten cold feet because I thought, ‘How many harebrained suggestions like this has Paul gotten over the years? I don’t want to appear too geeky,’” Jackson explained. “Finally, I thought, ‘I’m going to regret this for the rest of my life if I don’t even suggest it.’ I sent him a text.”
McCartney was thrilled by the idea, and has currently incorporated it in his ongoing tour after debuting it at his Glastonbury set this year.
In an interview with Guitar.com last year, Jackson talked about the “demixing” process he had developed to isolate instruments and vocals from footage of the band rehearsing and performing, explaining, “So the big breakthrough for us was actually not [restoring] the pictures, even though that’s what you obviously look at, it was the sound. The way that we managed to split off the mono recordings in the mouldable tracks.”
Jackson utilised AI-based machine learning for the process, which allowed him to also isolate private conversations between the Beatles that were hidden by the sound of instruments.
The post Peter Jackson is working on another Beatles film that’s “not really a documentary” appeared first on Guitar.com | All Things Guitar.