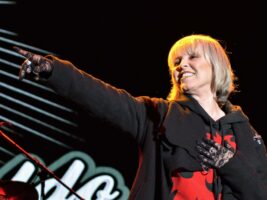 Pat Benatar has announced she will be retiring her 1980 hit single Hit Me With Your Best Shot in deference to the families of shooting victims.

READ MORE: Women are making the best music in 2022, says Elton John: “Apart from Sam Fender, none of the boys are doing it, the girls…

In a new interview with USA Today, Benatar told fans, “… if you want to hear the song, go home and listen to it.”
Benatar, who has not performed the hit since May, continued, “[The title] is tongue in cheek, but you have to draw the line,” she added. “I can’t say those words out loud with a smile on my face, I just can’t. I’m not going to go on stage and soap box – I go to my legislators – but that’s my small contribution to protesting. I’m not going to sing it. Tough.”
She did reassure fans that the band had come up with a “holy 14” set of songs that will always be included in their sets, though she also emphasised that lesser known songs like In the Heat of the Night and I Need a Lover would also receive playtime.
Benatar also shared her opinion on the recent Supreme Court decision to overturn the ruling of Roe V. Wade which protected the right to have an abortion, should someone choose to. “I’m worried, like all of us, about fundamental autonomy rights,” Benatar said. “This is a slippery slope. It’s not about abortion for me. I’m concerned that people are not paying attention to what this actually means.”
Benatar did not elaborate further.
The four-time Grammy winner is set to be inducted into the Rock N Roll Hall of Fame later this year at the 37th Annual Rock N Roll Hall of Fame Induction Ceremony at the Microsoft Theater in Los Angeles, California. The ceremony will take place will take place on Saturday, 5 November.
Benatar is also working on a musical adaptation of William Shakespeare’s classic play Romeo & Juliet with husband Neil Giraldo titled Invincible. Benatar is set to appear as Lady Capulet in the musical adaptation, which is expected to put on a full staging of the production following rehearsals this November after the Rock N Roll Hall of Fame induction.
The post Pat Benatar retires Hit Me With Your Best Shot in deference to families of shooting victims appeared first on Guitar.com | All Things Guitar.