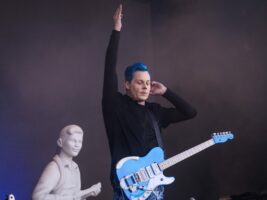 White released the album on July 22 via his label Third Man Records. The album was preceded by the single If I Die Tomorrow, which was released on July 8. White revealed in a new interview with Consequence that the songs on Fear Of The Dawn and Entering Heaven Alive were actually meant to be part of one album, but found himself grouping them in different camps.
“You get into the zone on every record and the songs are telling you the way it should be,” he told the outlet. “You stupidly have to start sculpting things around that.”
Listen to Jack White’s Entering Heaven Alive below.

White also called Entering Heaven Alive “the first thing I did that was really gentle,” noting that he worried the sonically heavier Fear Of The Dawn might be overshadowed by the new release coming so soon after. The vinyl resurgence icon released the first record on 8 April following the release of the title track two months earlier in February.
Jack White has recently spoken about the divisive reception he received for his 2008 James Bond theme song, Another Way To Die, which featured Alicia Keys and was included in the soundtrack for the Daniel Craig-led Quantum Of Solace. “It’s one of the most divisive things I’ve been a part of,” White said of the track. “To this day, it’s straight across the board. People always say you either love or you hate it. That song is… there are people who hate it so much, and there are people who love it so much. Nowhere in the middle; it’s so strange.”
White currently touring, and is about to finish his run of shows in Europe before heading to Japan’s Fuji Rock Festival and then back to the US to continue his tour. You can get tickets on his website here.
The post Jack White releases new acoustic album Entering Heaven Alive appeared first on Guitar.com | All Things Guitar.