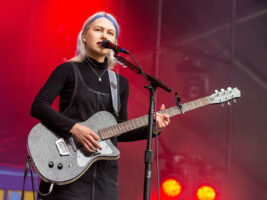 Phoebe Bridgers has been sued for defamation by a Los Angeles producer for $3.8million

Phoebe Bridgers has been sued for defamation by a Los Angeles producer for $3.8million in damages.
The lawsuit was filed by Chris Nelson, the owner of the recording studio Sound Space. In court documents Pitchfork claims to have seen, he alleges that Bridgers “intentionally used her high-profile public platform on Instagram” with intent to “destroy his reputation.”
The documents claim Nelson ​​and his ex-girlfriend “began having consensual sexual encounters” with Bridgers “in or around 2018” and, after the couple split up by the following year, Bridgers and the woman “continued their relationship”.
The lawsuit alleges Bridgers directed her followers to the Instagram account of Nelson’s ex-girlfriend, who allegedly claimed the producer “beat a young Latinx man to death,” “bludgeoned at least one other man with a baseball bat” and “defrauded [a] neighbour out of an estimated $100,000-$130,000”, among other crimes. According to Pitchfork, Nelson reportedly has an ongoing defamation lawsuit against his ex-girlfriend, as well.
Nelson’s complaint accuses Bridgers of making “false and misleading statements” on social media as “part of a vendetta to destroy [his] reputation that was enflamed by defendant Bridgers and [his ex-girlfriend’s] sexual relationship.”
Bridgers is alleged to have stated on Instagram: “I witnessed and can personally verify much of the abuse (grooming, stealing, violence) perpetuated by Chris Nelson, owner of a studio called Sound Space…”
Guitar.com has reached out to representatives of Phoebe Bridgers for comment.
According to Pitchfork, Nelson also filed a defamation lawsuit against actor-musician Noël Wells in December 2020.
In court documents the publication claims to have seen, Nelson alleged: “Wells intentionally and willfully contacted a music artist manager […] with whom [Nelson] had a working, professional relationship [with] stating falsely that [Nelson] committed an ‘incredibly predatory move on [her].’
“Defendant Wells also stated falsely that [Nelson] exhibited ‘incredibly predatory behaviour… toward young females including young female musicians.’ In making the false, defamatory, and misleading statements, Defendants Wells intended to interfere with and damage [Nelson]’s business and working relationship with the music manager.”
The post Phoebe Bridgers has been sued for defamation by a Los Angeles producer for $3.8million appeared first on Guitar.com | All Things Guitar.