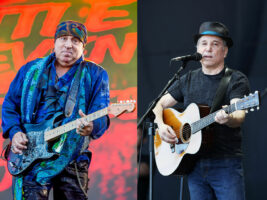 Guitarist Steven Van Zandt, known for his work with Bruce Springsteen’s E Street Band and his political activism, has spoken about his disagreement with musician Paul Simon over his 1986 album Graceland.

READ MORE: E Street Band’s Steven Van Zandt: “We have a government bragging about putting babies in cages. What can I possibly say that they aren’t saying themselves?”

Van Zandt was speaking to Ultimate Classic Rock about his new memoir, Unrequited Infatuations. In the book, he explores the conflict he had with Simon about the album. To record Graceland, Simon travelled to South Africa – breaking an international boycott put in place by the United Nations Anti-Apartheid Committee, and a widely-agreed upon cultural boycott. Despite the acclaim the album’s music garnered, Simon faced criticism from a wide range of artists and organisations including Van Zandt’s own group, Artists United Against Apartheid.
“I really like Paul, I really do, and we’ve had some great conversations through the years,” Van Zandt began when asked about the conflict. “I completely respect his work, he’s one of the great writers of the second generation. For him to be competing with the British Invasion as he did, and holding his own, that’s quite an accomplishment in the 1960s.”
“But [Graceland] is just one issue that we just couldn’t agree on. To this day he still thinks he’s right, and I’m like, ‘Whoa, we proved that we were right and you were wrong.’”
“And he just doesn’t want to hear it because he has a different philosophy about things. And I understand that – but to go against Nelson Mandela, to go against the ANC, the PAC [Pan Africanist Congress], ZAPU [Zimbabwe African People’s Union], to go against the entire anti-apartheid movement and say that you know better than they do… It’s arrogant – a little bit.
“So he has that, he has a little arrogance in him, as we all do from time to time.”
“He was making great music but at that point, the priority was not spreading South African music around the world. The priority was freeing South Africa from slavery,” Van Zandt concluded, before reiterating that he bears no ill-will towards Simon regarding the issue. “It was one of those things, he was the one exception. I was never mad at him really – I like him, I actually like him.”
The post Steven Van Zandt slams Paul Simon for going “against the entire anti-apartheid movement”: “It’s arrogant” appeared first on Guitar.com | All Things Guitar.