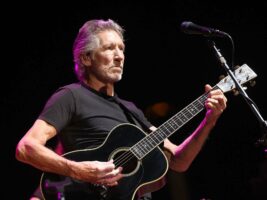 The track originally appeared on the seminal Pink Floyd album The Wall and was recreated by Waters during the lockdown, to act as an opening song for his tour This Is Not A Drill.
Comfortably Numb 2022 has been produced by Waters himself alongside Gus Seyffert, who made some changes to the original track.
“I pitched it a whole step down, in A Minor, to make it darker and arranged it with no solos, except over the outro chord sequence, where there is a heartrendingly beautiful female vocal solo from Shanay Johnson, one of our new singers,” says the musician.
As well as the track, Waters has also released a music video, which can be found below:

As well as the This Is Not A Drill tour that happened across North America earlier in the year, Waters will also be touring across Europe in 2023 with 40 shows across 14 European countries. The tour starts out in Lisbon, Portugal on March 17 and finishes in Manchester, England on June 10.
In more Roger Waters news, there has been calls for him to cancel his tour dates in Germany after the musician used his social media platform to criticise Israel, and show his support for the Boycott, Divestment and Sanctions (BDS) movement. As a result, the Antisemitism Commissioner for the State of Berlin has instructed the musician to cancel all dates in Germany, unless he distances himself from the movement, which is viewed deem as antisemitic by many.
For more information about the This Is Not A Drill tour, and how to listen to Comfortably Numb 2022, you can visit RogerWaters.com.
The post Pink Floyd’s Roger Waters releases Comfortably Numb 2022 appeared first on Guitar.com | All Things Guitar.