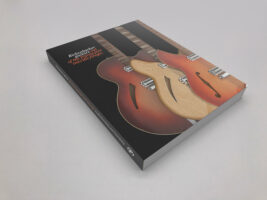 Preorders are open for Rickenbacker Guitars – Out of the Frying Pan Into the Fireglo, Martin and Paul Kelly’s long-awaited history of the brand

Preorders have opened for a new book detailing the history of Rickenbacker guitars, by Martin and Paul Kelly.

READ MORE: Rickenbacker is back with the limited-edition 480XC and 4005XC

Rickenbacker Guitars – Out of the Frying Pan Into the Fireglo will be released on 29 November of this year. There are two editions of the book, a Standard soft-back edition and a limited-edition Super Deluxe two-volume set. The latter, alongside the 336 colour pages of the main volume, comes with a 160-page book of Rickenbacker catalogue reprints spanning 1933-1969. These “impossibly rare” historical artefacts are reprinted here in their entirety for the first time.
Above: the rare catalogue reprints included with the Super Deluxe edition.
The main volume features the story of how George Beauchamp and Adolph Rickenbacker developed the first electric guitars in the 1930s in California, and the development of the later Rickenbacker models for which the brand is best known today.
There are also new interviews with legendary Rickenbacker players such as Roger McGuinn, Peter Buck, Susanna Hoffs, Johnny Marr, Mike Campbell, Geddy Lee and Paul Weller. Included is also original commentary from John Lennon, George Harrison, Tom Petty and Lemmy on the long-lasting appeal of the Rickenbacker.
The book follows Martin and Paul Kelly’s book Fender: The Golden Age 1946-1970, first published by Cassell Illustrated in 2010. That book was, notably, the first guitar history book to be stocked in New York’s Museum Of Modern Art.
Legendary Rush bassist Geddy Lee sang the book’s praises in a statement, saying: “In 1967, I watched The Beatles make history by playing All You Need Is Love live on television via satellite and the entire time I was transfixed on the rather odd-looking piece of four-stringed furniture Paul McCartney held in his mitts.
“Of course, I know now, that it was a Rickenbacker 4001S bass, and I’d have to wait until 1973 before my dream of owning one like it could come to fruition. As a favour to all lovers of musical instruments, Martin and Paul Kelly have combined art and information to create the definitive book about Rickenbacker in all its profound and quirky incarnations. It’s a joy to the eyes and is a must-have reference guide to this fascinating and historic musical brand.”
The Standard Soft Back edition is priced at £35 / $47, with the limited Super Deluxe two-volume edition being priced at £175 / $235. Find out more at phantombooks.com.
The post Preorders are open for Rickenbacker Guitars – Out of the Frying Pan Into the Fireglo, Martin and Paul Kelly’s long-awaited history of the brand appeared first on Guitar.com | All Things Guitar.