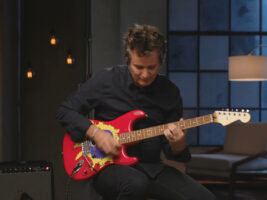 Hear the Screamadelica Stratocaster in action with Fender’s new demo

Fender has officially launched the 30th Anniversary Screamadelica Stratocaster, which it first introduced over the summer.

The instrument celebrates 30 years of Primal Scream’s groundbreaking Screamadelica album, released in September of 1991.
The guitar itself features an all-over graphic of Screamadelica’s album art, as well as a modern C-shaped maple neck with 9.5-inch radius pau ferro fingerboard and medium-jumbo frets. The graphic continues seamlessly over a set of matching knobs, and a matching pickguard. It will be available in highly limited quantities from November 2021.

Other features are standard fare for a Stratocaster, with three Vintage-Style ’60s Single-Coil Strat single coils, a five-way blade switch and a two-point synchronised vibrato.
You can hear the guitar being played by Produce Like A Pro’s Warren Huart in Fender’s official demo video below.

The instrument lists for $1049.99 / £1,199 / €1,349. Find out more at fender.com.
The post Hear the Screamadelica Stratocaster in action with Fender’s new demo appeared first on Guitar.com | All Things Guitar.