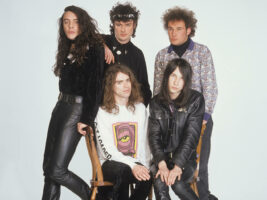 Primal Scream, Screamadelica and me: “He was frantically painting Tipp-Ex dots on the fretboard so he could find the notes”

When Primal Scream came together to record Screamadelica in 1990, there was a real sense that something special was happening. I remember it well, because I was there to witness and assist in the creation of one of one of the defining albums of the decade.

Back then I was working at Jam Studio in London’s Tollington Park. Previously named Decca 4. Jam was an old school studio featuring an orchestral live room and a glorious collection of vintage microphones and outboard gear – it was certainly more 1970s than 1990s. Like other studios from its era, Jam even had a flashing blue light in the control room that could be activated up in reception if the police showed up! But Primal Scream had recorded the standalone single Come Together (which would be heavily reworked by Andrew Weatherall for the album) at Jam, so they were happy to grab the studio time that Creation had previously booked for My Bloody Valentine, a band with which I had previously also worked.
A rocky start
My time working on Screamadelica didn’t get off to the most auspicious start, I was off sick for the first two sessions, and in the third I almost immediately had an altercation with Primal Scream’s engineer, followed by another a few days later. The following day, however, we received news that the engineer in question wouldn’t be returning, and that myself and my Jam colleague Paul Doyle would be taking over the sound engineering duties ourselves with our tape op James Gillespie (no relation) assisting.
We set about our task with enthusiasm, and our main microphones were a valve Neumann U47 and various Neumann U67s and AKG C28s. We recorded onto Ampex 456 two-inch tape using a Studer 24-track. Whenever possible I bypassed Jam’s Harrison desk and recorded directly to tape via Summit and Drawmer 1960 mic amps, with UREI 1176 and DBX 165 compressors.

Kick out the jam
I found Bobby Gillespie charismatic, likeable and fizzing with energy. He dressed like a rockstar and was unafraid to behave like one. He was also insecure about his vocal abilities and said he would be more than happy for the band to bring in another lead singer. This was shortly before Denise Johnson joined the group.
One evening James and I stayed late for Bobby to lay down a lead vocal. Although he was doing fine, he became increasingly frustrated with himself. Rather than take it out on the studio staff – as some singers are prone to do – Bobby was extremely apologetic and concerned that he was wasting our time. We both tried reassuring him that he wasn’t wasting our time or his. I liked his voice, and I still do – because nobody sounds like Bobby Gillespie.
Robert Young (aka Throb) had a formidable physical presence. Like a long haired, guitar-slinging Sean Connery, he seemed rock ’n’ roll incarnate. One evening we were chatting about Tim Buckley and I mentioned I couldn’t find his first album anywhere. When Robert got home, he made me a cassette from his vinyl copy – complete with a song list done in his own elegant handwriting. I still treasure it, and I remember him fondly.
From a musical perspective, Andrew Innes was a key driving force. As well as being an excellent rhythm guitarist, he had assumed programming duties and spent most of the Screamadelica sessions in the rear corner of the control room with his Atari 1040 computer and AKAI sampler.
I remember him being focussed and hardworking, but always ready to respond with a curt “not my department”, when asked to cover any of his bandmate’s duties. The vast majority of his programming contributions didn’t make it to the final mixes, but I doubt he ever intended them to.
When you hear the heavily compressed acoustic guitar on Movin’ On Up, that’s all Innes. The guitar in question was a vintage Gibson J-45, courtesy of Harris Hire, and it was one of the few things recorded – splendidly in my view – by the band’s original engineer.