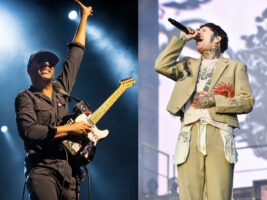 Tom Morello has released the latest single from his upcoming album The Atlas Underground Fire. The song, Let’s Get The Party Started, is a collaboration between Morello and metal band Bring Me The Horizon.

“Bring Me The Horizon are really the current standard-bearer of hard rock and metal today, and thank God for them for that,” Morello said in a statement. “I had a couple of huge riffs and we just started mashing it up with Zakk Cervini, who has worked with them before. This song was written on three continents – Oli was in Brazil, Jordan was in England and then I was here in L.A.
“It was a real United Nations of metal coming together to produce this song, which really feels to me like it captures the angst and the frustration of the pandemic boiling over into an all-time mosh pit. This song also has one of my favourite guitar solos that I’ve played in quite a while, as I was really digging deep to make a solo as devastating as the track.”
The Atlas Underground Fire will be released on 15 October. Its recording was heavily informed by the COVID-19 pandemic, as Morello explained upon its announcement: “This record was a liferaft in a difficult time that allowed me to find new ways of creating new global artistic connections that helped transform a time of fear and anxiety into one of musical expression and rocking jams.”
Hear Let’s Get The Party Started Below.

The Atlas Underground Fire’s tracklist is below, and can be preordered here.

The post Tom Morello rips it up with Bring Me The Horizon on new track Let’s Get The Party Started appeared first on Guitar.com | All Things Guitar.