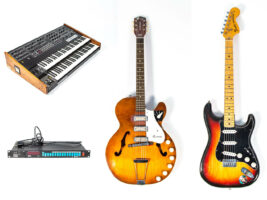 Billy Corgan has partnered with Reverb.com to open an online store selling several pieces of gear used on the classic Smashing Pumpkins records Mellon Collie And The Infinite Sadness and Siamese Dream. The gear being sold includes guitars, preamps, synths and more.

READ MORE:  What is the future of pedals? The top makers weigh in

The official Billy Corgan Reverb storefront will go live next week, on 29 September. Items going up for sale include Two gold Marshall JMP-1 preamps, Three 1980s ADA MP-1 preamps, two of which were used on the Smashing Pumpkins’ debut album Gish, A Drawmer 1960 stereo compressor that was the main compressor in Corgan’s home studio, A Sequential Circuit Prophet 10 synthesizer and 10 guitars.
The guitars include a 1976 sunburst Fender Stratocaster, a Yamaha SA2200 custom-made for Corgan, a Harmony Rocket and a Taylor 855 12-string. Some of these pieces of gear have seen continued use throughout the band’s discography, for instance, the Prophet 10 synth was heard on the band’s recent album CYR.
That’s just a taste of what’s going to be listed, however. The full store will feature over 100 pieces of gear from across Corgan’s career. Take a look at a selection of the gear going on sale below.

You can head on over to reverb.com to find out more about the store and sign up to be notified when it goes live.