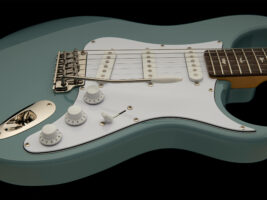 PRS has officially launched the long-awaited SE version of John Mayer’s signature Silver Sky electric guitar. The new model launches at less than half the price of the Core USA-made Silver Sky. The brand is anticipating such high demand that it’s planning on expanding its SE factory in Indonesia.

READ MORE: The PRS John Mayer Silver Sky SE is finally coming – and it makes a few key changes from the original

The Stratocaster-inspired guitar broadly takes on the same format as the USA Silver Sky, specifications wise. The guitar features a poplar body with a bolt-on maple neck, a 25.5-inch scale length and a rather unusual 8.5-inch radius for the 22-fret rosewood fretboard. This splits the difference between the core SE’s more rounded, vintage-correct 7.25-inch radius and the more common, flatter 9.5-inch radius. The back of the neck is carved to the same specifications as the Core Silver Sky.
In the pickups department, there’s a trio of 635JM “S” single-coils, voiced after those found in the original. These run into a Strat-style control section, and are joined by a two-point vibrato, vintage-style tuners and a synthetic bone nut.
The guitar also retains the same inverted PRS headstock shape, and PRS’ own double-action truss rod, accessible from the face of the headstock. Finish options are Dragon Fruit, Ever Green, Moon White, and Stone Blue.
Mayer said of the guitar: “With the release of the SE Silver Sky, PRS has kept the modern design aesthetic, tone and feel of the original model and made it accessible to more guitar players, from beginner to professional. I couldn’t be happier with it.” You can see him giving the instrument a demo in PRS’ video below.

Following on from a trend of growth, the launch of the guitar is joined by an announcement that, predicting high demand, PRS’ SE factory in Indonesia will be expanding. In February 2022, PRS Guitars and PT Cort will open a larger dedicated manufacturing space, leading to a 50 per cent increase in SE manufacturing capability by the end of 2022.
The guitar lists for £895 in the UK and $849 in the US. Find out more about the instrument at prsguitars.com.
The post PRS officially launches the SE Silver Sky, listing for $849 appeared first on Guitar.com | All Things Guitar.