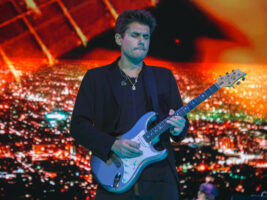 PRS Guitars has teased an SE version of John Mayer’s signature Strat-inspired Silver Sky guitar. The SE version of the guitar is set to be fully unveiled in January next year.

A joint Instagram post from both Mayer and PRS, displays a large SE logo alongside the words “Save the date,” before 11 January 2022 was revealed as the date in question.
No other details about the guitar have been revealed just yet. PRS’ SE range is its most affordable set of guitars, starting at around £600 and usually maxing out at around £1,000. The Silver Sky currently lists for £2,399.
PRS Guitars COO Jack Higginbotham first hinted that an SE version of the guitar could be on the way back in 2019, when MusicRadar asked him, “When is the John Mayer Silver Sky coming over to the SE line?” Higginbotham reportedly replied: “I like the way you did that: ‘When?’ Maybe you’d better turn off your voice recorder…”
Further confirmation came in March of this year, when the company Blacksmith Strings posted a photograph of a guitar box’s label. The model name was listed as “PRS Silver Sky”, however, the factory label read “PT Cort.” PT Cort is the name of the Indonesian company which, alongside its own guitar brand, manufactures the SE guitars for PRS.
You can see the teaser post below.