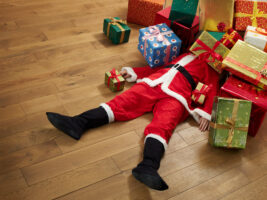 I’ll be the first to admit that this is the textbook definition of a clickbait article, but I had to get your attention for a good reason: it’s December. Time is quickly running out for us to find the New Year’s resolution that will launch us into a bigger and better 2022.

“Germanium transistors sound better than silicon.”
Germanium is a primitive type of transistor material found in very early devices used in the early age of electronics. They were a massive evolution that came after the vacuum tube and changed the world of electronics. Later on these germanium devices became extinct with the invention of silicon transistors, as silicon was more stable than germanium and easier to work with. These transistors are basically small amplifiers with three legs that you can use to amplify the signal. They are a building block to millions of circuits we use everyday.
People really get hung up on the fact that they think germanium transistors are better, and there’s good reason for thinking that. If you’ve ever played a real Tone Bender or a real Fuzz Face from back in the day, it’s a great sounding pedal, and both of those pedals were designed around germanium parts. We’ve heard them on the Zeppelin records; we’ve heard Jimi Hendrix play them. We’re very familiar with it, but it doesn’t make it better.
Let me point out the weird double standard on this: the Big Muff is silicon, which is the alternative. It’s a more modern type of transistor, not as rare, but no one says the Big Muff sounds like crap because it’s silicon. See where I’m going with this? If you know germanium is better and silicon sucks, you have to say the Big Muff sucks. Good luck getting that Ted Talk off the ground.
So here’s the deal: germanium is not better if germanium transistors are put in a crappy circuit. A circuit needs to be designed around the type of transistor or the types of parts you’re using, and in that it’ll sound good. I can take a silicon transistor and make a fuzz that you’ll love. As a matter of fact, most of my fuzzes are silicon, and you guys seem to love them, as they sell like crazy. Sales numbers and smiling guitarists don’t lie.

Wrapping it up
Mythology is an inextricable part of life, and guitar pedals are no exception. There’s always going to be some degree of nostalgia and emotion involved. No guitarist has a completely clinical view of pedals, and if they do, I pity them. A huge part of what makes guitar pedals so much fun is that everyone experiences them in a unique way. If you lined up three electric guitarists with exactly the same pedalboard, they would pull completely different sounds out of those pedals. Your playing style is colored by dozens of factors, including your musical background, your guitar heroes (or heroines) and the decade/country where you grew up.
What I’m trying to say here is that we should play the gear we love, understand that magical circuitry isn’t involved and admit the beautiful reality that our memories and emotions can guide us into creativity in ways that the gear itself cannot. Embrace what you like about a specific piece of gear, even if it’s as simple as how you feel when you play it or how it looks on your pedalboard.
I’m going to fall back on my favorite motto here: if it sounds good, then it is good – and of story. Merry Christmas!
For more features, click here.
The post Josh Scott Column: The Day that Santa Died (Or Four Guitar Pedal Myths, Busted) appeared first on Guitar.com | All Things Guitar.