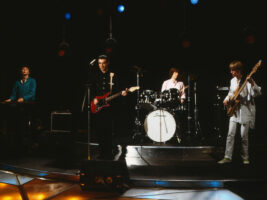 The Genius Of… Fear of Music by Talking Heads

“Never listen to electric guitar” commands a typically unbalanced David Byrne on Fear of Music’s penultimate cut, aptly dubbed Electric Guitar. With any other band, you’d likely expect that a track titled after this most cherished of instruments would foreground it prominently – a flashy lead break here, pummelling chords there. But Talking Heads were not like other bands. And, Fear of Music is quite unlike any other album. In fact, the closest Electric Guitar comes to such a moment is probably a skittish, minuscule riff that darts away from the songs’ taut chorus in abject terror. Strident stadium rock, this was not.

This is Fear of Music, Talking Heads’ third album, and their second (of three) that they would make in collaboration with Brian Eno. Across its eleven tracks, the interplay of the band’s instruments with each other and Eno’s synthetic froth is explored, leading to some of the band’s most arresting songs, wherein the conventional mechanics of a post-punk band are upturned, dissected and re-organised. The wonderful results encompass a spectrum of often warring tones, textures and moods.

This ain’t no party
Talking Heads had formed only a few years prior, after David Byrne met drummer Chris Frantz and his girlfriend Tina Weymouth while studying at Rhode Island School of Design. Sharing a similar Dada-ist sensibility, Frantz and Byrne put together a musical duo, The Artistics – later to be re-named Talking Heads. After a period without a bass player, Weymouth (after three auditions) joined her partner and the idiosyncratic Byrne as the bassist. “We didn’t copy anyone’s style, and no one could copy ours.” Recalled Chris Frantz in his memoir, Remain In Love, “You could say that Tina and I were the team who made David Byrne famous. We were very good at shining the spotlight on him. We created a band that was post-punk before there was Post-Punk, new wave before there was New Wave, and alternative before there was Alternative.”
Relocating to New York, the trio began a recurring stint performing at the legendary CBGB club. They soon developed a reputation as a jaggedly-edged post-punk trio. The addition of The Modern Lovers’ Jerry Harrison on guitar and keys further solidified their sound. In 1977, debut album Talking Heads: 77 was released on Sire Records. Its janky key cut, and lead single Psycho Killer, served as something of a manifesto, emphasising Frantz and Weymouth’s rigid rhythmic nucleus, Byrne’s tense and neurotic vocal delivery and stiff rhythmic guitar work all round.
The following year, the band released the sophomore More Songs About Buildings and Food. This was their first in collaboration with Brian Eno. The former glam rock titan and synth pioneer of Roxy Music had started to cultivate a reputation as an indispensable musical foil for a range of artists including Ultravox, Robert Fripp and David Bowie. He’d kept an attentive eye on Talking Heads. “They took American light funk, people like Hamilton Bohannon, and married it with downtown New York punk or new wave. Now everybody does it but at the time it was a very new idea.” Eno recollected in The Guardian.
Working alongside the forward-thinking Eno invigorated Byrne, and the two became close creative and personal friends. “It was mutually beneficial and co-dependent in a way. We had musical things to gain from one another – each one could offer something slightly different to the other.” Byrne was quoted as saying in Red Bull’s Daily Note magazine.
“Eno is the only person who understands David’s guitar playing,” Tina told Creem in 1979. “David’s sense of rhythm is insane but fantastic. A song will start off a mess but become like a baby koala bear. It’s difficult to turn a really stupid idea into something brilliant. David turns a sketch into a painting. He’s great at convincing us that a crazy idea will end up brilliantly.”
This first collaboration bore much fruit, namely the delirious guitar textures sprinkled atop the warmth of Eno’s synth tones, evidenced on With Our Love, and of course, the moody cover of Al Green’s Take Me To The River, which broke the band into the Top 30 singles chart for the first time. It would later evolve into a fast-paced, live highlight (the best version of which can be seen on legendary concert film Stop Making Sense, with Byrne sporting his signature ‘big suit’).

For more reviews, click here.
The post The Genius Of… Fear of Music by Talking Heads appeared first on Guitar.com | All Things Guitar.