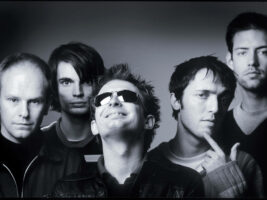 Radiohead’s complete discography has been made available on the digital music distribution platform Bandcamp.

The albums available for purchase include their entire chronology of studio albums, as well as their live albums, B-sides compilations and other records – including the recently-announced KID A MNESIAE project.
Each LP lists for $9.99 – or more, if you want. Purchases will allow you to stream the album via the Bandcamp app, and download it in a number of different digital formats – ranging from varying levels of MP3 quality, to lossless FLAC files.
Bandcamp and Radiohead make for an apt pairing. In 2007, Radiohead released their seventh album In Rainbows for free on their website, encouraging fans to pay what they want. In 2008, Bandcamp was launched, allowing artists to offer albums with this same pricing structure. The platform has garnered praise from artists for this flexibility, and the relatively high revenue percentage per digital sale for the artist.
The news comes after Radiohead guitarist Ed O’Brien took part in the UK Department For Culture, Media and Sport’s inquiry into the economics of music streaming, where he testified that the current system needs to change in favour of musicians.
See Radiohead’s digital discography here.
The post Radiohead’s entire discography is now available on Bandcamp appeared first on Guitar.com | All Things Guitar.