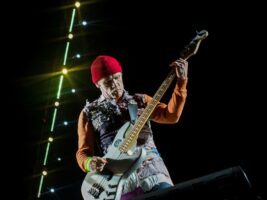 Red Hot Chili Peppers have shared new song Not the One, the third track from their forthcoming album Unlimited Love that’s set to arrive next week on 1 April.

READ MORE: Red Hot Chili Peppers to be awarded a star on the Hollywood Walk Of Fame

The moody single features bass and piano work from Flea, and is the most downbeat of the three — including Black Summer and Poster Child — that we have heard so far.

Produced by Rick Rubin, Unlimited Love is the follow-up to Red Hot Chili Peppers’ 2016 record The Getaway. It is also the band’s first release with guitarist John Frusciante since 2006’s Stadium Arcadium.
On their upcoming record, the band said, “our only goal is to get lost in the music. We (John, Anthony, Chad and Flea) spent thousands of hours, collectively and individually, honing our craft and showing up for one another, to make the best album we could. Our antennae attuned to the divine cosmos, we were just so damn grateful for the opportunity to be in a room together, and, once again, try to get better.”
They continued, “Days, weeks and months spent listening to each other, composing, jamming freely, and arranging the fruit of those jams with great care and purpose. The sounds, rhythms, vibrations, words and melodies had us enrapt.
Meanwhile, RHCP will kick off their 2022 world tour – the first in five years – on 4 June, in Seville, Spain.
You can pre-order the album here. Check out the full album tracklist below.
Red Hot Chili Peppers’s Unlimited Love: