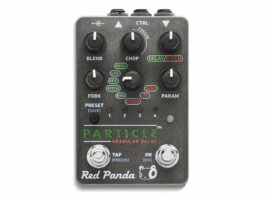 Reverb.com has released a limited edition version of the granular delay and pitch shifting Red Panda Particle 2 pedal, to celebrate a decade since the release of the original Particle.

READ MORE: Fender to push ‘full steam’ into effects in 2023: “We have some cool stuff coming towards the middle or end of the year”

Eagle eyed fans will recognise that the ten year anniversary was actually in 2021, but with the supply chain issues as a result of the pandemic, the new release of Red Panda’s Particle 2 in a limited colourway has been delayed until now.
Only 250 units of the Red Panda Particle 2 in a new translucent finish will be available for purchase, referencing the original 25 pedals from 2011, as well as the popular custom ghost black finish from the V1 pedals.
Like the original Particle, the has three pitch modes: detune, density and LFO, and five delay modes: random, density, LFO, random pitch, and reverse. As well as this there are also four additional dials for Blend, Chop, Feedback, and Parameter.
Additionally, the pedal also features an auto-freeze/stutter with adjustable threshold, and a tap tempo/momentary freeze footswitch.
The pedal is also performance friendly, meaning there are assignable expression pedals and a DIY-friendly remote switch for hands free control. Furthermore, it is pedalboard-friendly with all jacks on top. With full MIDI control, stereo input/output, and +8 dBu maximum input level, it is also at home in modular setups or the studio.
The price has not been unveiled, but if the original Particle 2 is retailing for $329.00, it is expected to be around the same price.
The post Reverb celebrates 10 years of the Red Panda Particle with special limited-edition run appeared first on Guitar.com | All Things Guitar.