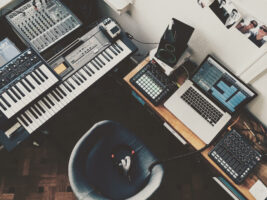 New data shared by Reverb.com has shone a light on gear fans’ buying and searching habits in 2021, revealing how 2021 has been the “Year Of The Keyboard” but guitars are as popular as ever.

The naming of 2021 as the “Year Of The Keyboard” stems from the fact that searches on Reverb.com for keyboards and synthesizers between January and September have increased in popularity by 34 per cent compared to last year. The most searched synth across this period was the Teenage Engineering OP-1.
However, guitar fans shouldn’t take this as a sign of the instrument’s impending demise – if you’ve been following the industry’s reaction to the pandemic, you’ll know there’s been a consistent boom in its popularity, and Reverb is not exempt to this – Reverb notes that there were around 30 million searches between January and February for electric and acoustic guitars.
Reverb shared that one of the most searched-for guitars across this period was the PRS Silver Sky, the signature model for guitarist John Mayer. This guitar has also placed among the top five selling guitars of the last three months. Its popularity in terms of searching is perhaps related to the limited-edition Lunar Ice Silver Sky that arrived in January, and the subsequent discussion of scalping that followed. Certain sellers on Reverb posted highly-inflated listings for the instrument, seemingly capitalising on its limited-edition nature. These were then cracked down on by Reverb and PRS.
To put its search popularity into perspective, here are the top-selling guitars of the last 90 days according to Reverb:

The post Reverb says it’s been the “Year Of The Keyboard,” but guitars still remain “incredibly popular” – see which guitars are selling the most appeared first on Guitar.com | All Things Guitar.